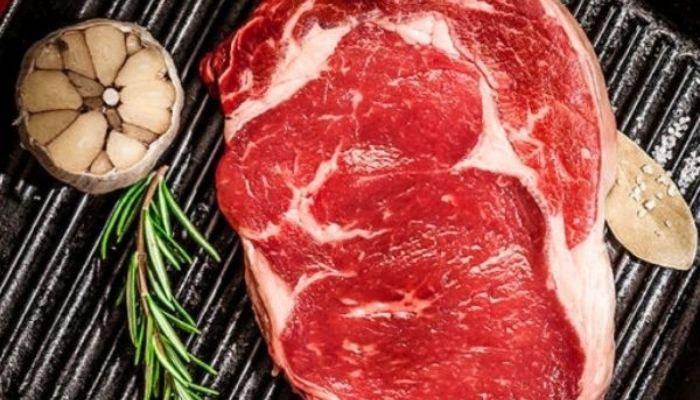 You are probably pretty sure that you know the answer to the question of why meat is red? But if you think that it is because of the blood, then you are wrong.

The red-colored juice which is excreted from the meat when it is cut or sliced is not residual blood.

Read on to find out more about why meat is red and how this is affected by cooking the protein.

Why is meat red?

So, what is this red liquid which is left onto the packaging of the meat and which starts oozing from it when you begin cutting it?

It is actually a mixture of a bright red protein called myoglobin which gives the meat this bright red color, and water, which makes up about 70% of fresh meat.

What is myoglobin, and what makes it red?

Myoglobin (Mb) is a protein binding oxygen and iron, which is found in the muscle tissues of most mammals.

In humans, myoglobin can be found in the bloodstream after a muscle injury.

Mammals such as seals and whales have higher concentrations of myoglobin which is what allows them to swim underwater and hold their breath for so long.

It is the heme pigment in myoglobin that gives meat the beautiful and rich red color. The heme pigment is also the chemical structure that is responsible for hemoglobin which is the pigment that makes animal and human blood red.

As for the meat we eat, different meats and different cuts have different levels of myoglobin in them.

Also, the older the animal, the more myoglobin will be contained in its meat, which is why veal is a much lighter colored meat as compared to beef.

Plus, the cuts which include the harder working muscles of the animal used for running and walking, such as the rump or shoulder, tend to contain more myoglobin and are a darker red than other muscles which are less worked, such as the tenderloin, which is a muscle used for support of the body.

When it comes to raw meat, the color caused by the myoglobin can differ depending on how long the meat has been exposed to oxygen.

A steak that has been vacuum packed immediately after slaughter tends to have a darker and almost purplish color, while steak which is displayed which is not packed is a much brighter red color.

If the meat has a tan or brown hue, this can mean that either the meat is already several days old or that it has not been exposed to oxygen.

Several days after the meat is cut and exposed to oxygen, the iron contained in it starts oxidizing and produces metmyoglobin. This takes away that bright red color that attracts customers in the first place. But the appearance of metmyoglobin which causes this color change, does not mean that the meat has gone bad. Not if it is within the expiry date. Still, few people are prone to buy meat that has changed color and doesn’t appear as fresh and bright red, but we will be talking about this problem and the tricks which merchants use to mask this later on in this article.

How myoglobin changes color during cooking

Not only does myoglobin change its color over time when the meat is uncooked, but it will change color when it is cooked as well. When the protein is cooked, it will transform into a grayish-brown color.

When you are cooking rare beef, it will keep a lot of its red color, but when it has been safely heated to an internal temperature of up to 140 degrees Fahrenheit, the myoglobin stops being able to bind with oxygen, and the iron atom loses an electron. This complicated chemical process causes the formation of hemichromes, which is a pale brown compound, and which gives the medium-rare beef a light tan color.

When the beef is cooked to an internal temperature of 170 degrees F and above, then the levels of hemichromes rise even more, and the red myoglobin turns into a denatured metmyoglobin which makes the meat look dark brown when it is well done.

Even though these changes in the color of the meat can be an indicator of the temperature reached, it is still recommended that you use a reliable meat thermometer to ensure that the internal temperature of the meat has reached the recommended safe levels and the doneness of your preference.

Still, each type of meat and cut can transform its color when exposed to heat differently, depending on the presence of oxygen and the content of iron in it.

This is why in some cases, burger patties can look completely cooked through and brown, but when their internal temperature is measured, they prove to be unsafe to eat and undercooked.

The reason for this premature color change and browning can be because the metmyoglobin has already been produced due to oxidation.

On the other hand, some meat can remain persistently pink even when cooked to the recommended internal temperature. This can happen when the meat has a higher myoglobin count, and it hasn’t completely broken down by the heat.

The same pinkness can be found in some cured meats such as hot dogs, ham, and bacon which are cured with sodium nitrate, which reacts with the myoglobin, thus transforming it into brighter red nitroso myoglobin.

Once heated, this bright pink will fade as the protein converts into nitroso hemochrome.

So, as you can see, although the color change in meat can be an indicator of its doneness, it is always important to use an accurate meat thermometer to make sure that the meat is properly cooked and is safe to eat

We usually split the meat we eat into two basic categories – red and white based on how the meat looks when it is raw.

Here are the main differences between red meat and white meat.

Red meat is usually used to define beef cuts and some pork and lamb cuts of meat.

It is recommended that you get to know the different cuts of meat and which part of the animal carcass they come from to understand their structure, flavor qualities, and their color.

Meat is made up mostly of muscle, so all of these qualities of the cut depend on how hard used the muscles are. Some are highly developed due to intensive use, while others are not so developed.

The ones which are more intensively used contain more oxygen and thus have a higher content of myoglobin. The higher content of oxygen stored in these long twitch muscles is what allows them to keep constantly working and with higher endurance than the other muscles.

The more hard-worked the muscle, the higher its myoglobin levels and the darker its color will be.

All mammals have some myoglobin in their muscles, even birds which are traditionally referred to as white meat. There is more myoglobin in the muscles and parts of the birds, which are used more during the lifetime of the animal, such as the thighs and legs of ground walking birds such as chicken and turkey, or the wings in birds that fly long distances.

Still, in most cases, when it comes to poultry, these parts of the bird are usually referred to as dark meat and not red meat.

White meat is a term used most often for poultry, namely for chicken and turkey.

Some people call pork white meat as well, even though it can be considered red meat.

The difference in the structure of white meat and red meat is that white meat contains fast-twitch muscle fibers. These fibers are formed from short and quick bursts of activity as compared to the continuous and endurance activities of the long-twitch muscles found in red meat.

These short and brief energy bursts in birds do not require the storage of oxygen in myoglobin. Instead, the energy for these bursts comes from glycogen which is the primary carbohydrate storage that can be mobilized immediately when a quick burst and movement is needed. This makes it perfect for the fast-twitch muscle fibers.

Typically, white meat looks translucent when it is raw and then transforms into opaque and then white as it is cooked. But as we mentioned previously, some of the poultry cuts, such as the legs, are considered dark meat, especially when compared to the breast, which is white meat.

The more hardworking and endurance muscles in poultry also contain some myoglobin but in much lesser amounts than in other meats, and not enough to color the poultry cut the same color as a beef cut.

Tricks that supermarkets use to make meat look fresher

As we mentioned earlier, after several days, the meat starts changing its color and appearance, which is due to oxidation.

But customers find the brighter red meat to be much more appetizing than one which has a browner tint.

This is why retailers use some tricks to preserve that brighter red hue of the meat for as long as possible.

This is done by stopping the oxidizing of the myoglobin, which is usually done with the help of carbon monoxide or with dioxide gas used to bond with the myoglobin instead.

This is a commonly used process known as MAP (Modified Atmosphere Packaging) which helps preserve the brighter red color of the meat but unfortunately doesn’t prevent the meat from going bad over time as its expiration date approaches.

While the process doesn’t make the meat unsafe, it can be quite deceptive, so it is important to check the expiration dates on the meat you buy, and even better, to ensure that you are buying fresh meat from a trusted source or your local butcher instead.

So, the redness of the meat is not blood at all but is due to the myoglobin protein in the muscles and its red pigment – the heme. Myoglobin is the protein that is used for storing oxygen in long-fiber muscles, which are used intensively and constantly by the animal.

This is why you shouldn’t feel disgusted when you see the red juice oozing out of the meat because it is a protein mixed with water.

Some meats and cuts have higher, and others have lower levels of myoglobin, and their color changes over time, as well as during the cooking.

All of this is based on the different chemical processes in the body, and hopefully, you have found this information intriguing and informative.