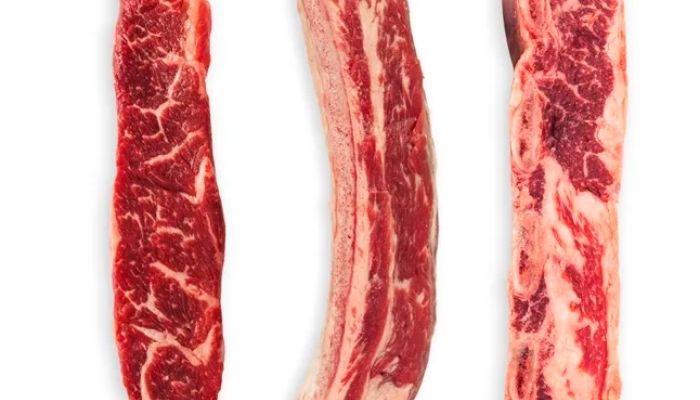 When it comes to beef ribs there’s more than meets the eye. Particularly when you’re a rookie and discovering that beef ribs are just a general term for all the different cuts that exist. To help you understand this often confusing concept, we’ve compiled an in-depth report with details on the several beef variations in the market.

Sure this isn’t going to be as straightforward as pork ribs, but nothing too hard to understand either. Next time you make a trip to your butcher, you’ll know exactly what kind of ribs you’re looking for. Let’s begin!

To start, why we have different groupings of beef ribs in the first place is because the rib cage of a steer extends far. From the shoulder blade to the last rib, there’s a lot of surface area accumulating about 3-4 feet. So where exactly you cut is what makes the difference. And as you can imagine, traits such as the meat texture, length of the bone, will vary too.

That said, the 3 main types of beef ribs are:

We’ll take a closer look at each and how best to cook every single one.

Typically, ribs are more commonly classified into either short ribs or back ribs. But as we’re about to see, short ribs further subdivide depending on what region they have been sourced.

In this case, the above kind is cut from a primal cut known as the short plate. It is located around the lower region of the ribs anywhere between the 6th-10th rib.

Plate short ribs are also known as “loaded beef ribs” or “brisket on a stick” owing to the generous meat on the bones, about 2 inches thick to be precise. On the scale, they could way up to slightly over 1 pound.

Going for a fuller rack of short ribs is probably best as opposed to single ribs though these too are available if you like. You will typically find meat vendors selling short ribs in a pack of 4.

Being a meaty cut, the best approach is low and slow. It’s almost like cooking brisket so it’s going to take some time before all the flesh is done, and you don’t want to dry out the inherent juices along the way. So techniques such as smoking or indirect cooking are recommended.

The best part is when all is said and done, the fat marbling will render an amazing flavor and tenderness. This is why plate short ribs are such a staple in Texas-style BBQs.

The techniques to cutting will also cause a change in name although technically you’re dealing with the same rib cut. As for short ribs, here are the common styles of cutting that you may have come across.

When you shop for short ribs, the English cut is what a lot of commercial suppliers trade in. It’s where a portion of the ribs is pulled out from in between other ribs resulting in a rather heavy rack. By extension, the meat that sits on top of the flat-looking bones is plenty too.

English cuts come with a top layer of hard fat and membrane which has to be removed before throwing them onto the grill.

Unlike the English cut where ribs are separated from in-between a full rib cage, here, the ribs are butchered all around the perimeter instead. The division, therefore, leaves each slice with lesser meat to chew on and a few bones in it. Usually, the standard thickness of a flanken cut is about ½ inch so it’s quite a thin strip.

The fat and membrane layer that we talked of in the English cut is optional. When you choose to leave it on, we say the cut is untrimmed.

Taking off this dense layer leaves behind a nice, clean red meat ratio that has been trimmed.

This has not much difference from the trimmed cut except that the fat deposits have been thoroughly removed. Lean cuts have a significantly lower fat ratio compared to others.

Riblets are a variation of the English cut whereby the ribs have been separated into individuals and further split to give shorter pieces. The meat on top remains untampered, however, the length of the bone is reduced by half to about one and a half inches long.

When English-style ribs have the bone in them removed, the result is a juicy steak. The bone-free slab of meat could run 8 inches long with the meat rising to about 2 inches in thickness. You could buy boneless ribs straight from the butcher or do it yourself if you trust your handy skills.

Back ribs stray far from the meaty versions that are otherwise common in spare and short ribs. They have lesser meat on top and longer curved bones around 6-8 inches long. Back ribs are drawn from the leftovers of a rib roast which is another name for the prime rib.

Being that the prime rib is an expensive cut; sellers tend to leave most of the meat on the roast rather than the ribs. However, the soft quality of the roast extends to the ribs from which they are cut (back ribs).

Now that there’s not a lump of meat to spend time on, faster techniques such as braising or grilling could work. However, this is not to rule out more controlled approaches such as wood smoking as they impart a deep rich flavor.

Chuck short ribs are found higher up a steer in the front part of the rib cage region between the 1st-5th rib. They are similar to plate short ribs in terms of meat concentration, however, the latter takes the prize. Chuck ribs are shorter in length measuring anywhere between 3-6 inches.

You could employ various methods with this kind, grilling being one of the best. Because of their small size, they fit perfectly and will need lesser time over the fire. When you need to further tenderize the ribs, braising is a good idea, before finally finishing off with a quick sear.

Best Types of Ribs for Barbecue

Not many cuts can compete with the results plate short ribs bring to the table when barbecued. They are tender with just the right amount of fat to render the kind of texture that melts away in your mouth. Again, because of the connective tissue, you still get some chew from it.
If plate short ribs prove hard to come by, consider chuck ribs instead. They may even be better if you want smaller ribs that are nearly just as meaty. Only be keen on the fat ratio because too much or too little will jeopardize the result.

Difference between Beef and Pork Ribs

Except for the obvious being that the two are sourced from different animals, the two differ in other traits as well. Beef ribs are significantly larger in size and with that, they offer more meat as well.

Again, in terms of intramuscular marbling, pork ribs come up short. It’s beef ribs that have a higher concentration, something that plays off in how tender and tasty the ribs cook.

Finally, with a good beef rib cut, you need not much to work with. A simple rub with equal pepper and salt is enough to bring out the best. With pork, however, sweet sauces are the game-changer. Learn more about preparing pork ribs here.

Keep in mind beef ribs will have different names depending on where they have been sourced and how they’ve been cut. All in all, the important thing is that you familiarize yourself with the fundamentals so you can tell them apart no matter what form they come in.