The spring season of 2020 saw the debut of the long-awaited Traeger Silverton 620, which was first stocked in Costco. Due to its newness in the market, many grilling enthusiasts are still in a dilemma of whether to purchase it or not.

Before indulging further into the finer details, we wish to clear your doubts with the assurance that this grill is indeed worth the $699 on its price tag.

That said, let’s talk more about what the equipment has to offer. Besides the in-depth research on its features, specifications, and other details, we’ll also bring you up to speed on its comparison to other units in the Traeger brand collection.

Traeger Silverton 620 has many helpful specifications. The most common one is the double-tiered grate that offers a total cooking area of 620 sq. inches.

It also has a hopper where pellets are dumped. The container holds up to 20 pounds worth of materials.

Compared to Timberline, Ironwood, and Pro grills, the Traeger Silverton 360 has a similar auger, motor, meat probe, and controller.

It also has vents through which smoke exhausts. Like the Timberline and Ironwood grills, this equipment’s ventilation system is also designed at the back. The manufacturer says that exhausting the smoke from the rear side of the grill makes food more flavorful, improves convection, and cooks food faster.

Taking your first glance at the grill, you’ll notice two vital details; a cover and bucket that captures grease drippings. A pellet grill needs a cover to protect it from adverse weather conditions that would otherwise damage it.

Secondly, it needs a grease collection container for easier cleaning. The best part about this is that it is enclosed within the grill’s cabinet to prevent you or your pets from tripping over it. 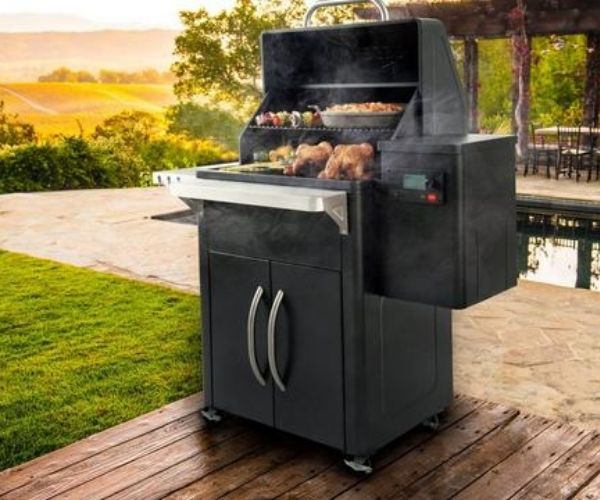 On the new features section, Silverton’s adoption of the D2 Direct Drive and the WiFire controller systems are the greatest upgrade yet. The programs function the same as those in Timberline and Ironwood units.

The D2 Drive system has a smart auger/motor and extra power to perform its functions. With the WiFire controller, you can run the equipment from the comfort of your smart device by connecting it to the grill. It’s useful for finer tuning of its temperature.

The combination of the new auger and motor with the WiFire controller enables you to achieve a temperature as high as 500°F, which is higher than the usual 450°F.

Your grill is also capable of backing up the heat range with the help of a new feature known as the Turbo Temp. It assists in heat retention within the cooking surface after the lid is opened and closed.

You’ll need to be careful with the initial setup, especially when operating the WiFire controller. For effectiveness, you should come up with a method of dividing your WiFi signal to give an option of 2.4 GHz. If your router offers a 5GHz signal, it means that it has a high speed but may be unable to cover long distances or penetrate the walls. By splitting it, you elongate its waves since a 2.4 GHz WiFi signal can pass through obstacles to connect to your grill.

The grill has two distinct issues. The first one is that its temperature ranges lack stability, hence varying under different conditions. The second problem is that it releases a lower volume of smoke compared to earlier models.

The issue of producing less smoke is notable across all the Traeger models fitted with the WiFire system. However, smoking enthusiasts refuse to let it slow them down, and they have devised mechanisms to cope with it. Most folks counter the smoke production problem by first setting a low heat range of 165° F to 185° F for 60 minutes. Afterward, they increase it until it reaches the required temperatures to start their cooking process.

Unlike the Ironwood grill, the Silverton 620 lacks the special SuperSmoke feature that eases the smoke production problem.

The varying temperatures in the grate cease to be an issue once you learn your way around the adjustment knobs. You must also understand how the heat zones within the cooking area work. By knowing the hot spots and the cooler ones, you can prepare your meals in the rightful section, depending on their temperature requirements.

Traeger Silverton 620 Vs. Other Traeger Grills

The Ironwood 650 and the Pro Series 575 make up the closest options to the Silverton 620. They are all products of the Traeger brand.

The three units have similarities in their features. But, from our team’s point of view, we believe the Silverton 620 model ranks top amongst the other two.

The Pro Series model’s primary cooking area is 15 percent bigger than that of the Silverton 620. However, the latter compensates for that with its secondary grate, which is larger.

After purchasing the Silverton 620 grill, you’ll receive a work table fixed in front of the equipment, a grill cover, and a pellet hopper. The Pro Series 575 lacks these accompaniments, and you have to pay an extra 120 dollars to acquire the cover and table.

The vent system is another feature that differentiates the two models. For the Silverton 620, the smoke moves downward and surrounds the cooking area. This approach creates a closer contact between the meat and the smoke as a result of an improved convection heating process.

On the other hand, the Pro Series 575 model uses the upward and outward approach to release smoke. The grill’s outlet is mounted at the top, unlike that of the Silverton unit, which is mounted on the rear end.

Comparing Costco’s customer reviews on the two units, the Pro Series model had a slightly higher 5-star rating than the Silverton grill.
The latter topped the 4-star ratings with 12% overall, while the Pro Series unit had 9% of the reviews in that category.

The customers’ overall satisfaction with the Pro Series and the Silverton grills was 86% and 83%, respectively. The common issue under 1-star ratings for both models was the damaged attachments during shipping and inefficient control systems.

The main beneficial feature of the Ironwood grill is the SuperSmoke mode. The unit also matches up the competition with its highly insulated double wall. In addition, it has a feature that senses and alerts you when the pellets in the hopper reduce beyond the needed capacity.

That, however, may not be enough to compensate for the 500 dollars premium that the Silverton grill has against it. Judging from customers’ reviews, the Silverton unit ranks higher than the Ironwood 650.

Here’s is a highlight of more precise data:

With 12% and 71% reviews on the 4-star and 5-star ratings, respectively, the Silverton 620 received an 83% rating in the overall satisfaction category.

The satisfaction rating of the Ironwood 650 was also 83 percent, while its 4-star and 5-star reviews reached 8% and 75%, respectively.

Considering that the Silverton grill is cheaper than the Ironwood, the equal score in their overall satisfaction shows that they are good quality equipment. It also means that you can enjoy similar services for less by buying the Silverton 620 in place of the Ironwood 620.

Traeger Silverton 620 Vs. Other Pellet Grills

No matter the time you spend analyzing Traegers against competitor brands, you’ll still get confused along the way. To avoid that, you must be well aware of the exact specifications and features you want in a grill before checking it out in the market.

For instance, if you are looking for a grill that smokes on pellets, has fancy applications, and sears impressively, Silverton grill is your go-to equipment in the list of units under Traeger.

If you do not care about recording precise temperature, then you may not require a grill that comes with a sophisticated controller. Likewise, if you are not after a grill that supports WiFi and can be tuned from a distance, the solution is to purchase a different model from the Silverton 620. The Traeger brand offers you a variety of choices for grills that meet such specifications.

One of the most common products is the Z Grill. Our team has tried it, and we can attest to its capabilities. It’s possible that the makers of this grill are the same ones who used to make older Traeger models. That explains the similarities in features such as the manual dials for heat control.

Other competitive pellet grill brands are the Weber Smokefire and the Pit Boss. Despite its many desirable features, the Pit Boss lacks the high technological advancement found in Traeger units. However, it’s suitable for users who’d rather spend their time closely monitoring their smoking meat than controlling it from a distance using apps.

When pitted against each other, the reviews from Traeger vs. Weber Smokefire were relatively negative. The latter has several issues that lower its user-friendliness making the Traeger brand more favorable

Is Traeger Silverton 620 Worth It?

Yes! From a user’s point of view, our team highly recommends the Traeger Silverton 620 Grill. From its great specifications to all the likable features, you are guaranteed value for your money upon purchasing it.

Apart from the downside of facing a few hardships while setting up the WiFire control system, everything else on this unit is designed to make your grilling process as easy as possible!