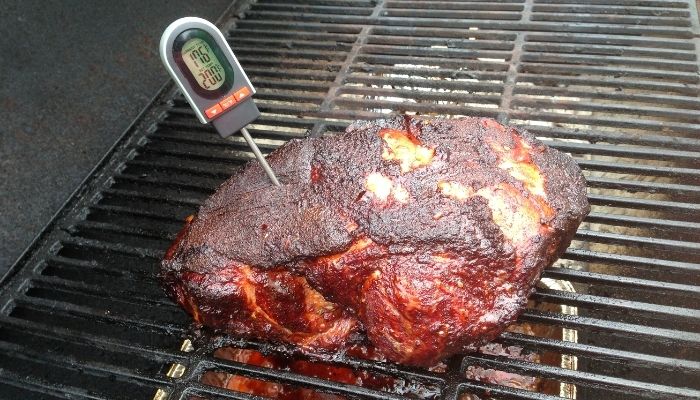 For you to qualify as a great smoker or pitmaster, you have to be knowledgeable about the correct temperatures. There’s always a specific temperature that gets your meat well pulled and anything too high or lower than that is bound to mess it up. If you are keen on watching BBQ shows, you’ll notice that even the most qualified and celebrated pitmasters are equipped with a digital thermometer.

This measures the amount of heat in the smoker. It also helps in knowing when the meat has attained the correct temperature and whether or not it’s ready for consumption.

Meat cooked in the correct heat range is tender and filled with flavors.

There are many ways to master the right temperatures for different meat types such as pork, beef brisket, sausage, fish, or chicken. Charts and temperature tables are among the most popular methods.

Many people are stuck between following the specified temperature and the cooking time outlined in the recipe. The most advisable thing to do is to work with the latter because if the food hasn’t achieved the correct temperature by the specified time, it is still not ready. On the other hand, if its internal temperature matches the recommended one, you can take the meat out of the smoker before the time outlined in the recipe elapses.

The two elements, however, affect one another, and most often the time and temperature differences should not be too far out of range from the one given on charts.

Times and Temperatures for Beef Smoking

As seen on the chart, there are different beef cuts and products gained after processing cattle meat. Given their differences in terms of tenderness and other factors, different cuts may require different smoking times and temperatures.

The chart also shows three columns: the first two are for the heat ranges and the last one represents the approximate time taken to cook meat at the mentioned temperatures.

How to Know When Smoked Brisket is Ready 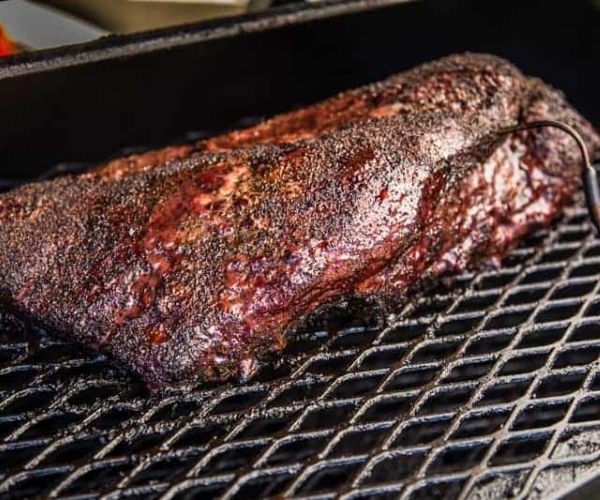 The recommended temperature to achieve a brisket’s doneness during smoking ranges from 195 to 205°F. Most pitmasters consider the meat ready at 203°F.

One important detail to note is that the brisket continues cooking even when it’s rested and can add up to 10°F.

There are two distinct signs to watch out for so that you are sure that your brisket has attained the right temperatures.

The first thing to check is whether the meat is jiggly when you touch or shake it. Well-cooked brisket shakes like jello in a bowl.

The second feature to note is if the meat is easy to pierce when the probe thermometer or toothpick is inserted through it.

For a well-cooked Prime rib, make sure that you use the smoker first, under the recommended temperatures. Towards the end of your cooking process, place the meat on a hot oven or grill. Cook until the external part of the beef cut is brown and crunchy.

When making sausages that are not cured, make the temperature hotter than that of cured ones.

Times and Temperatures for Smoking Pork

The smoking time and internal temperatures vary from one pork chop to the other.

How Do You Know When Pork Butt is Done?

The recommended internal temperature for pork butt is 195°F. Some people prefer to cook up to the 203°F mark to achieve their desired doneness.

How to Know When the Pork Ribs are Done

At 145°F, ribs are considered safe for consumption. Most people, however, don’t consider the meat done until its internal temperature range is between 190 and 203°F. At around this temperature, most of the collagen is broken down and melted, leaving the meat tender.
Important points to note

Times and Temperatures for Smoking Lamb

Times and Temperatures for Smoking Poultry

Notes:
It’s advisable to avoid smoking a whole turkey that weighs more than 14 pounds. This helps prevent it from remaining in the danger zone, longer than it should, due to its weight.

Here are 4 of the best woods for smoking turkey and 3 to avoid.

Smoking Temperatures and Time for Fish and Seafood

Charts act as a guide to direct you on the maximum and minimum temperature to smoke different types of meat. They are great assistants especially to people who are venturing into these activities for the first time.

You can have a quick glimpse of the details of these charts to know the expected temperature range.

A pitmaster who’s experienced, however, may have issues relying on the stated time and temperature.

It is possible to make a great barbecue under a slow and low cooking pace. Likewise, you can produce equally excellent meat chunks using a fast and hot method under a heat range of 350°F and more.

A master of the pit might feel grounded by the listed numbers on the chart because no one can tell the exact temperature or times best suited for perfect pork butt, brisket, or poultry.

The temperature can end up being higher or lower by approximately 10 to 20°F.

It may also be hard to give an exact prediction of the time taken to cook different cuts. Other variable factors affect the cooking period, among them are the size of meat, diameter, thickness, shape among others.

You might be forced to adjust the timer upwards or downwards depending on the mentioned factors.

Smoking time is not constant. It is affected by some of the factors outlined below:

The topic of time factor during smoking is a wide one. Some people use a  shorter time under high temperatures while others prefer cooking slowly under low heat. This leads to time variation, even when the same type of meat is being smoked.

Health and Safety of Meat Temperature

Smoked meat requires lower temperatures as compared to other cooking methods. This makes the process prone to causing health problems if the right safety measures are not observed.

Issues such as food poisoning in barbecue are common and they all trace back to how the meat was handled during smoking.

When the smoking meat’s temperature is at the range of 40 to 140°F, bacteria get a chance to multiply. If left unattended, the meat takes 4 hours before getting into the danger zone due to extreme bacterial multiplication.

To be on the safe side, it’s advisable to abide by the following instructions:

The USDA provides the recommended temperatures for different levels of meat doneness. By following these guidelines, you are safe from consuming danger-zone meat.

If you are not smoking the meat immediately, avoid leaving it exposed on the surface. It should be refrigerated under 40°F then thawed properly before cooking.

The Difference Between ‘Ready to Eat’ and ‘Done’ Meat

Some people prefer smoking meat using a slow and low technique. This ensures that all the tissues connecting tough sections of meat are well cooked. The meat becomes tender and savory despite exceeding the guidelines of ‘well done’ meat.

The waiting time may exceed the expected or given time, depending on the type of meat that you are smoking. To make the meat more tender, it is advisable to wrap it up in foil and leave it to rest. This means that despite the meat getting ‘done’, it is not ready until two hours later when it is rested.

For tender and savory smoked meat, the cooking temperature and internal temperature of the meat are important factors to consider.

You have to maintain a consistent heat range and be knowledgeable about important skills to make a mouthwatering barbecue.

Monitoring the meat’s temperature involves inserting a thermometer in it for accuracy.

You can connect more than one thermometer to your Wi-fi and monitor the smoker and meat’s temperature co-currently. This helps you to check both at the same time so as to make decisions that are more informed.

Meats chopped into smaller sizes such as fish and sausages may require a thermometer that gives instant readings, unlike the rest which can work well with leave-in thermometers.

How to Manage a Long Smoke

Some smoking periods last between 4 and 16 hours. There are different challenges that can be experienced during this time. You need the following tips to counter them and come up with great results from your smoking process.

1. How to Counter the Dreaded ‘Stall’

A BBQ stall is everyone’s nightmare when it comes to smoking meat. This occurs when the meat’s temperature maintains a constant reading without rising. It can last up to 2 hours, wasting precious time and delaying the readiness of the cooked meat.

It can be avoided by wrapping the meat in aluminum foil or butcher paper during the cooking session.

If not careful, you can end up over-smoking your meat. This is caused by setting a temperature that is too high or leaving the meat in the smoker for too long. This results in loss of flavors and sogginess of the internal parts.

It is advisable to follow up on the recommended smoking time and temperatures for balanced smoking.

3. Having Control Over Your Grill’s Temperature

The recommended temperature for the smoker or grill ranges between 225 and 250°F. Maintaining stability can be challenging as the smoker adjusts itself due to different factors like the weather.

To avoid these issues, keep checking and readjusting the temperature until it is stable enough to complete the cooking process without a hitch.

Striking a balance between the smoking temperatures and the time taken for smoking can be a tricky affair. Temperature charts are important but not always necessary. Once you are conversant with the configuration that works for you, you are bound to have a smooth smoking session every time you embark on it.

If you are new to these smoking techniques, it is advisable to observe both the chart’s listings and the guidelines of certified bodies such as the USDA. This helps you avoid problems such as food poisoning which arise from keeping meat in the danger zone for long.