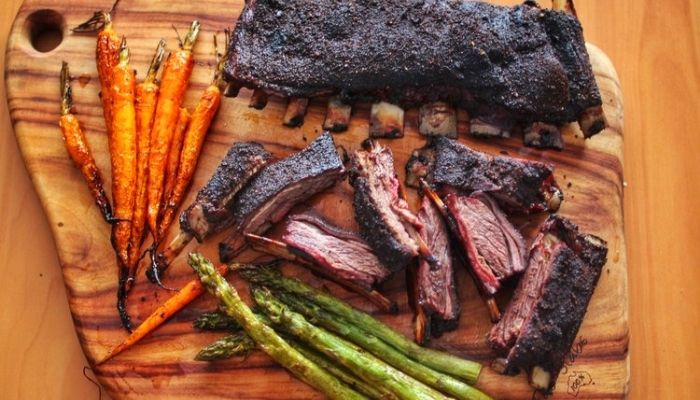 Unless it’s the deer hunting season and you fancy the sport, you typically wouldn’t wake up on a normal day and think to get some venison ribs. Not when there are a ton of different beef and pork cuts just waiting on you to make a pick. The closest it gets to serving deer is when it’s been thrown into the grinder, diced up into thin pieces, and sold as jerky.

What if we sold you in on the idea of BBQ smoked venison ribs? The fall-off-the-bone kind of ribs that will have you craving for more! Well. We know just how to prepare it. And if you have your doubts about softening up such a tough piece of meat, stick around and you’ll see it’s not that hard either!

What are Venison Ribs?

In case you didn’t already pick up on it, venison is a general name for game meat. It’s more precisely used in reference to the deer, antelope, or elk family. As is common with a lot of game meats, they tend to possess a strong flavor, stronger than what we typically taste in a cow or pig. If you’ve had the privilege to try some you would concur.

Still on the characteristics, it is a lean steak. For some people, the lower-fat ratio works well because then you’re not ingesting an unhealthy amount. But as you can imagine, it being so can also come off as tough. If not cooked with the right procedure you may be up for some tough jaw work.

Venison meat comes in a wide variety of forms. The cured jerky version is more common in supermarkets but you could equally have it minced or even stuffed into sausages. For the best cuts, aim for the tenderloin, ham, or shoulders.

In this particular read, however, we’ll be focusing on a very specific part- the ribs. Unlike ordinary ones, these require delicate handling because of their special nature. That said here are a few preparation steps to getting the most flavored venison ribs.

The good news is venison ribs are not expensive. You can get them at a throw-away price in some parts of the state. And if you’re a hunter, at no cost.

· Trim off the Membrane and Fat

Once you have your ribs purchased from the butcher the first step is to skin that slippery outer layer of the membrane. All it takes is a sharp knife to poke through one end and using your fingers, begin to lift off the silver cover progressively. If you’re familiar with the trimming process you should be able to get the membrane off in one go. But if not, gently work your way through until you can longer spot any trace of the covering.

The next thing is to reduce any fat. It’s not going to be thick marbling or anything of the sort but whatever deposits you come across should be removed. Equally, apply a boning knife so you can cut through easily.

If you’re not confident in peeling off the membrane or trimming the fat by yourself, consider asking your butcher for help.

Now, this is purely optional and some people tend to skip it. But before you join this lot, understand that marinating helps lock in moisture while imparting deeper flavors. Not only that but in the process, the meat tends to tenderize so you don’t end up taking eternity in the cooking stage.

Experts suggest that you marinate overnight or for about 12 hours for maximum absorption. You’ll need a couple of ingredients to prepare your brine and they are;

Mix up everything into a huge bowl and immerse the ribs inside. Ensure that the wet mixture is sufficient enough to have the ribs totally submerged. If need be, separate the ribs into halves so that they fit into the bowl. Proceed to place it in the refrigerator and wait the next day.

Apart from the brine, you’re going to need a dry rub too. Before this, once you’ve pulled out your ribs from the solution, let them sit and dry out in open air for about 30 minutes.

While this is taking course, get to prep your spices. You’re free to throw in whatever you like so don’t be shy to pull out those beloved combos. Just ensure to sprinkle liberal amounts of salt in there to tie everything together.

For this part, you’re going to get your hands dirty. This is so you reach every nook and cranny with ease. To get you started, have;

Coat generously on both sides of the rib rack while you bring your cooker to temperature in the background.

Finally, here we are! Whether you choose to use the smoker or grill method, the important thing here is to stay on top of the temperatures. The ribs should cook low and slow to retain as much moisture as possible while still getting a bit of char.

In that case, the two-zone fire setup is the better approach. How to go about it is simple. Simply pile the coals to one side of the smoker and light them up. Leave the indirect zone without. This is the portion where the ribs will go on so that they cook under controlled heat temperatures.

Introduce a briquette to ensure the coals stay lit all through before introducing some wood chips. In the early stages, be sure to open up all vents to the maximum so that the fire is fuelled. Once up and going, you can begin to regulate the air openings so that the temperatures do not spike.

What you should aim for is blue smoke billowing through. Too much thick smoke and the ribs risk coming out bitter to the taste. The only true way to keep a close eye on what’s going on inside the cooking chamber is by the use of a smoker thermometer. And just to double-check accuracy, you could also have a spare meat thermometer to give a reading of how done your cook is.

First things first bring your smoker up to about 225°F. This is usually the standard temperature for most BBQs unless otherwise. Crack the lid door and vents open until you have a healthy flame. Introduce your wood chunks systematically until you begin to notice smoke whips escaping.

The preferred wood type venison BBQ is hardwood, the likes of hickory and oak. If you like some fruit sweetness, apple would be a good blend. It’s unnecessary to soak the wood chips beforehand considering the short cook time so it’s okay to skip this.

Once your smoker box is ready, place the ribs onto the grates and watch the clock. About 2 hours of cook time is estimated and during this period, avoid opening the lid door without cause. The ribs should then be ready, having the meat tearing apart from the bones is a good indicator. At this point, the internal temperatures should read about 140F.

For the last step, leave the ribs to rest between 15-20 minutes before plating up the delicacy. Drizzle some BBQ sauce as a topping if you like and enjoy!