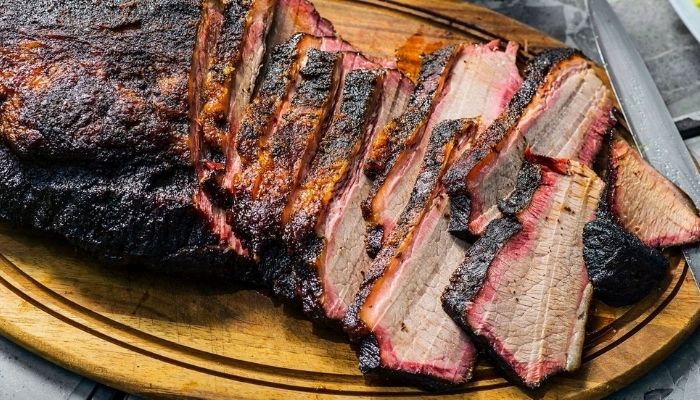 Yes, you read it right – pork brisket. You may not have heard about pork brisket before, but the fact is that this is a new pork cut that is becoming increasingly popular.

Smoked pork brisket is actually quite delicious when prepared properly.

Read on to find out more about the pork brisket cut and how to cook it so that you can enjoy a delicious smoked pork brisket dish.

If you’ve never heard of pork brisket, you’re not alone. I hadn’t either until the good folks at Porter Road asked if they could send us some to try out.

What is the pork brisket cut?

Pork brisket is a new cut that is definitely not as popular as beef brisket. While it is probably not available at your local supermarket, if you go to a real whole animal butcher, he or she will know exactly what you mean.

The pig’s brisket is found in the same area of the animal’s body as that of the cow.

It is a large part of the picnic ham of the animal when it is boned out. This is the part where the pectoral muscles and the shoulder of the pig come together.

The good news is that it has the same features that beef brisket has, making it a favorite cut for low and slow-smoking. Pork brisket has that beautiful fat marbling and connective tissue, which will break down during the cooking process.

It is a great cut to braise, roast, or smoke.

What does whole animal butchery mean?

Whole animal butchery is growing in popularity among eco-conscious butchers, processors, and consumers. It is a process that involves using as much of the carcass of the animal as possible, even when the good cuts are removed. The idea is to leave as little leftover meat as possible.

In most cases, the leftover cuts are used to make sausage, but some butchers offer whole “leftover” cuts like pork brisket to their customers.

How do the two muscles of the animal affect the quality of the pork brisket?

Just like with cows, the brisket of the pig is made up of two separate muscles which meet at the shoulder. But unlike beef brisket, the fat ratio of the two is reversed in the pork brisket.

With the pork brisket, the flat end comes from the side of the pig’s belly and is fattier than the chest portion which is lean and is part of the pork picnic cut.

With pork, the pork picnics are less popular than the Boston butt cut from the animal’s shoulder.

How to prepare smoked pork brisket?

It is rich in connective tissue and fat marbling, and they render beautifully when the meat is cooked at low temperatures slowly.

Since the pork brisket is smaller than the beef brisket, it requires less cooking and smoking time. But the cooking time depends on the internal temperature of the pork rather than a set cooking time.

Prepare the pork brisket for the smoking

Take the brisket out of the refrigerator. You should trim and silver skin if you see it. This skin can hinder the proper penetration of the smoke, marinade, rub, and other seasonings.

In case there is a large fat cap on the cut, you should trim it down to about ¼ inch.

We recommend that you order your pork brisket from a reliable butcher, such as Porter Road. The online butchery offers fresh meat from pasture-raised meat from local farms. Butchers like them offer the meat properly trimmed and cleaned from the silver skin, so you won’t need to trim it or prep it too much.

Keep in mind that the pork brisket lacks the layer of point flat that the beef brisket has, so you need to monitor the internal temperature and the bark of your meat during the cooking to prevent overcooking it.

When the pork cut is trimmed and cleaned, you can dust it with a smoked BBQ pork rub of your choice. Pat the rub onto the meat with your hands.

Let the meat sit and reach room temperature for about 30-60 minutes before cooking it.

While the meat is resting, you can go ahead and prepare the smoker. Set the temperature to 250 degrees Fahrenheit. You should adjust the smoker in order to hold this temperature consistent throughout the cooking.

If the brisket is small, you may want to keep the temperature to up to 250 degrees Fahrenheit, while for larger cuts, you can allow some variance.

When the temperature is stabilized, you can add the coal and cooking wood.

You can use any wood of your choice, but our recommendation is to use Royal Oak for the pork brisket. You can add a few chunks of hickory wood which will add to the smoky taste of the pork.

If you have a charcoal smoker, you can add the wood chunks using the Minion Method.

If you are using an offset smoker and are using wood as the primary fuel, then you don’t need to add more wood. Just make sure you keep the fire and temperature steady.

After the smoker has reached a steady temperature, you can add the pork brisket on the grate and close the door.

Do not touch it, or open the smoker for at least a couple of hours. The larger the piece of meat is, the longer you should wait before opening the smoker’s door.

Should you wrap the smoked pork brisket?

When you open the door to check on the meat, inspect it for bark. The ideal bark on the pork brisket should be dark red, as the fat renders inside the meat.

If the cut is larger, you may need to wrap it in foil for the remainder of the cooking until it reaches the target temperature or with pink butcher paper to reach the right bark color and texture.

Leave it unwrapped if the bark has not formed.

Serve and eat the pork brisket

When the pork has reached the desired internal temperature of 195 degrees, take it out of the smoker and let it rest for 30-60 minutes at room temperature. This will help redistribute the juices in the meat and will allow the brisket to keep cooking until it reaches 200 degrees Fahrenheit.

Use a sharp knife, slice it into slices that are ½ inch thick, and then rotate and slice against the grain again.

It should be served warm with the sauces and sides of your choice.

The taste of the properly smoked pork brisket is robust and juicy. While the leaner meat from the shoulder is similar to that of pork chops or loin, the belly side’s end has an added juiciness and the flavor of pulled pork.

While it is not the most spectacular pork cut to smoke and taste, the pork brisket is definitely a new cut that you should try out if you are a pitmaster or a fan of pork, or if you like the idea of whole animal butchery.