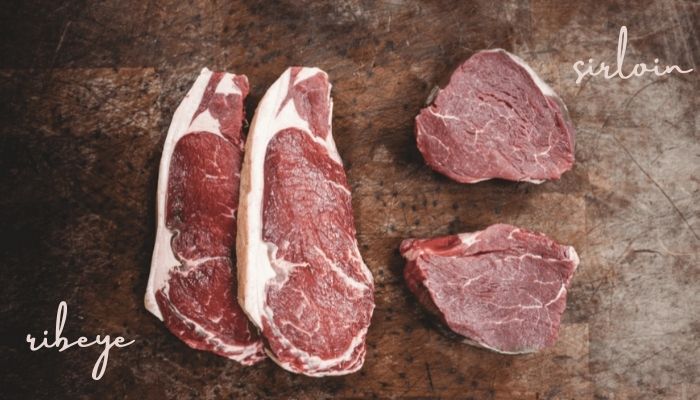 Chances are that when you enter a steakhouse or think about steak cuts, the first two ones that come to mind are ribeye and sirloin. The two are among the most popular beef steak cuts, and while they are a top choice when it comes to steaks, the reality is that they are two quite different cuts.

If you want to learn more about how sirloin vs. ribeye compare, what the pros and cons of each of these cuts are, and how to best prepare them, read on.

As its name suggests, the ribeye is a cut that comes from the rib primal of the animal, and more specifically, from the sixth and twelfth ribs.

The anatomical name for the ribeye cap is Spinalis Dorsi, and the French call it calotte.

The cut includes part of the tender longissimus dorsi muscle and may include a whole, or a part of the rib bone along with the flavorful fat attached to it.

Most of these steaks have a spinalis muscle cap which is separated from the other muscle by a delicious fat kernel.

The spinalis part of the ribeye has beautiful marbling which is made of thin strips of intramuscular fat, which when rendered down during the cooking makes the ribeye steak so delicious, juicy, beefy, and tender. The fatty spinalis and the leaner longissimus dorsi combine each other perfectly.

Often the ribeye cap is cooked separately and is considered by many pitmasters and meat lovers – the best beef cut of all.

Other names used for the ribeye cut include beauty steak, Scotch fillet, Butcher’s butter, Spencer, Delmonico, and others.

The sirloin is significantly larger than the ribeye and is often cut into several other steak types.

It comes from the back of the animal and is a cut from behind the ribs, but before the rump area.

Sirloin cuts and steaks are much leaner than ribeye and have a low-fat and high protein content.

The sirloin cuts have a mouthwatering beefy flavor, but because they do not have as much marbling and fat, these steaks are not as tender as the ribeye steaks.

Still, the sirloin is a delicious beef cut, which is chewy but not dry or tough, and when prepared properly, can be the star of the show.

For an even deeper flavor, you may want to opt for a sirloin cut or steak which has been dry-aged for a minimum of 21 days.

Some of the popular cuts which can be cut out of the sirloin include the top sirloin, as well as the T-bone steak and roasts.

They are a popular choice among meat lovers who love top-quality steaks but want something which is less fatty than the ribeye.

Is ribeye better than sirloin?

Which of these two beef cuts is better depends on your personal preferences. But if you are having trouble deciding which one is the better option for you, here are some main features of each of these cuts and how they compare to one another:

The ribeye has a lot more marbling than the sirloin and has a distinctive spinalis cap which is fatty and increases the juiciness and flavor of this steak. In some cases, the ribeye can look like a comma with a cleaned part of the rib bone which is known as the cowboy cut. In others, the cut can come with the whole rib bone, which is better known as the tomahawk steak.

The sirloin on the other hand is a larger cut, which is quite a lot leaner and lacks the rich marbling and the fat cap of the ribeye.

The depth of the flavor of any steak and beef cut comes from the amount of fat and marbling it contains. The ribeye, as mentioned earlier, has much more intramuscular fat and has a fatty cap which makes it taste richer and the steak juicier.

The sirloin is a leaner beef cut but is still very flavorful, especially if you get dry-aged sirloin. The steaks from this cut have a wonderful chewiness to them but without the meat being dry or tough. The sirloin too has a rich beefy taste and is a better option for people who prefer meat with less fat.

If you want, you can even dry-age the sirloin at home using dry-aging bags.

The cost of each of these beef cuts depends on where you are buying the meat from, what type and breed of animal they come from, their USDA grades, how much they weigh, the thickness of the cut, how aged the meat is, what the demand is, as well as their USDA ratings.

Since the USDA beef rating system is based on the marbling of the cut, and the ribeye is the cut that is evaluated and used for rating the entire animal carcass, the price per pound of the ribeye will most likely be higher as compared to the sirloin from the same animal. The cuts will be rated as USDA Prime, Choice, or Select beef.

In some cases, you may be able to find bone-in ribeye steaks, which are cheaper than the boneless sirloin cuts.

Keep in mind that in most cases, if you buy a whole sirloin cut, you will need to break it down into the smaller cuts you want yourself.

Eating leaner beef is healthier than eating fattier meat, and can lead to a lowering of the “bad” LDL cholesterol in the blood, of course when combined with other healthier foods such as veggies, fruits, and whole grains.

If you are looking for a way to lower the fat you consume, then you should opt for the leaner of the two beef cuts, which is the sirloin.

But don’t worry about having to eat tough and dry meat because when prepared properly, the sirloin steaks and roasts can taste equally as delicious and can be as tender as the significantly fattier ribeye steaks.

What about the Tomahawk steaks?

Tomahawk steak is a relatively new cut that has gained a lot of reputation, but what does it taste like, how much does it cost, and what are its health benefits? Is it worth investing in one of these steaks? We’ll explore both cuts below!

It’s not worth it to buy Tomahawk steak because it’s just the same as Ribeye only more expensive. In addition, you are paying extra for the bone that you can’t eat.

The reason why Tomahawk steak is so pricy is because of its increasing popularity in the US and the rest of the world.

When looking at the health benefits of Tomahawk steak and Ribeye, they are quite similar.

Based on the current price and analyzing it against the ribeye steak, it’s not worth spending the extra money on Tomahawk steak.

In conclusion, just buy a regular ribeye because for the Tomahawk steak you are paying too much for what you are getting.

How to prepare them

Since the ribeye and the sirloin are very different beef cuts, they each need to be prepared and cooked in a different manner in order to get the best and most delicious results.

While there are hundreds of recipes for cooking each of these beef cuts, here are our top recommended cooking instructions for both ribeye and sirloin.

Due to its rich marbling and high-fat content, the ribeye is best prepared via a high heat quick sear. This will help render the fat to add juiciness to the meat and will help form that mouthwatering crust on the steak.

Here are the step-by-step instructions for searing a ribeye steak:

If you are planning on cooking a top sirloin, we recommend that you use a more delicate approach than high heat searing.

For the best results, you can use a sous vide technique and then reverse sear the top sirloin.

Here is a step-by-step guide for preparing sirloin:

We hope that we have helped you understand what the difference between these two most popular beef cuts is and how to prepare each one for the best end results and to get the most of these high-quality meat cuts.

Which one is the better cut in this head-to-head sirloin vs. ribeye comparison depends on your personal taste and preferences.

We must say that you will be making an excellent choice whichever one you choose- because both the ribeye and sirloin are among the tastiest cuts you can get from the animal.