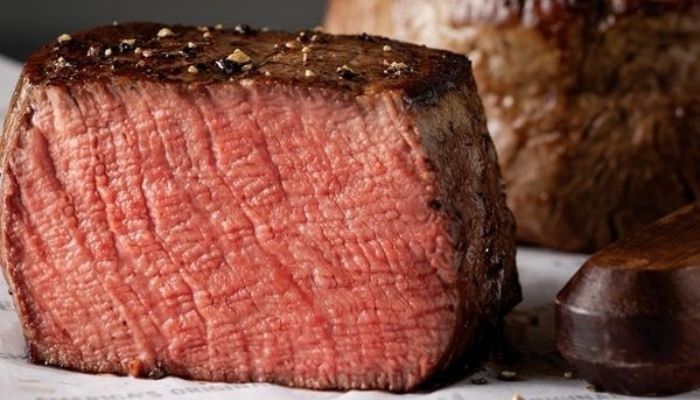 The reverse searing technique has been gaining momentum. Even though it overturns all of the traditional cooking directions that can be found in older cookbooks, it is now a preferred way by many, especially when it comes to cooking thick steak.

The reverse searing method involves low and slow cooking of the steak over indirect fire first and then finishing it off by searing it over blazing hot direct fire.

Read on to find out more about the reverse sear technique, its pros and cons, and how to reverse sear a steak at home.

This is a relatively new cooking technique that apparently was started as a cheaper and easier alternative to sous vide cooking in the early 2000s. The reverse sear was popularized by J. Kenji Lopez-Alt from Food Lab in 2017 on Serious Eats.

The award-winning chef and cookbook author swears by this method when it comes to cooking thick steaks.

The idea is to slowly and evenly cook the meat at a low temperature until it almost reaches the doneness temperature you want, and then to finish it up by searing it over direct heat.

This method ensures that the meat is cooked evenly and that the juices and flavors are sealed inside the meat thanks to the searing at the end.

Even though the method seemed to have appeared as a much more affordable and readily available cooking method than sous vide, some chefs and pitmasters claim that it is better than sous vide when it comes to cooking steaks. The reason is that the steaks develop better and more delicious crusts when reverse seared, rather than being taken out from the wet sous vide bag and placed in the scorching hot pan or grill.

The main advantages of the reverse sear method include:

Downsides of the reverse sear method

Reverse searing has some downsides, too, including:

The reverse sear method for a steak

While it takes longer than traditional steak grilling, reverse searing is actually quite simple and includes only a few easy steps.

Plus, you will have plenty of time to prep the meal, side dishes, and get organized while the steak is cooking low and slow.

You can use a charcoal grill, smoker, or an oven and stovetop to reverse sear the steak.

One of the key elements is to have a good meat thermometer handy to keep an eye on the internal temperature of the meat during the cooking so that you achieve the perfect doneness for your taste.

Since reverse searing includes two cooking stages, it is essential to remember that you will need to stop the low and slow cooking of the steak and take it out for the searing when its internal temperature is about 10-15 degrees Fahrenheit from the desired doneness. This is because it will be finished over direct heat and will continue cooking in the pan or on the grill.

Here are the internal temperatures and the time required for low and slow cooking of a ½ inch steak at 250 degrees Fahrenheit:

The time for low and slow cooking is 20-25 minutes

The time for low and slow cooking is 25-30 minutes

The time for low and slow cooking is 30-35 minutes

The time for low and slow cooking is 35-40 minutes

Once again, you will need a suitable meat thermometer if you want to use the reverse sear method for cooking your steak.

It is recommended to dry brine the steak on the night before the cooking. This goes for any thick-cut steak.

Use kosher salt and ground pepper and sprinkle the meat generously. Set the steak on a wire rack in a baking sheet and leave it uncovered in the refrigerator overnight.

This will help dry the surface of the meat for better results from the reverse searing.

Remember that the lower and slower the cooking, the more even the cook will be, but it will take longer too.

If you have an accurate oven or a smoker, you can even set the temperature to a temperature lower than 200 degrees Fahrenheit.

When cooking outdoors on a grill, you can create a two-zone cooking surface by using a charcoal chimney on one side or by only turning half of the gas grill’s burners. Then cover it and let it heat up.

When the grill or oven has preheated to the set low temperature, place the steak inside the oven or on the cool zone of the grill. Place it with the fatty side of the bone side down.

Let it cook slowly via indirect heat for as long as it takes for the meat to reach an internal temperature that is just about 10-15 degrees F lower than the target doneness temperature.

It is crucial to use an accurate meat thermometer if you want to avoid overcooking or undercooking the steak. Insert the probe into the thickest part of the cut to get the right temperature readings.

Thankfully, due to the low temperatures and the longer cooking time, it is much less likely to let the steak overcook using the reverse sear method.

When the time comes to take the steak off of the grill or out of the oven, heat up a skillet with some cooking oil in the hot zone of the grill or on a very hot stovetop or other searing station.

If using a skillet, opt for a cast-iron one or a pan made of triple-clad stainless steel.

When the oil begins smoking, it is ready to add the steak with a tablespoon of butter. Let the steak cook by swirling it in the pan but not flipping it. You can lift it with a spatula to see how it is browning and keep basting it with the butter.

When the first side is nicely browned and seared, which will usually take about 45 seconds, you can flip the steak over and repeat the process. Then, use the tongs to sear the edges of the steak until it is completely crisped and browned.

Actually, while resting, the cooked meat is almost always essential for the best results, with reverse searing, you will not need to rest the steak before cutting into it or serving it, according to some pitmasters.

Others recommend that it is rested for at least 8 to 10 minutes for the juices to be preserved.

So this is a dispute which is ongoing.

So, you may want to follow your gut or experiment with the resting to see which results you like better.

How to serve it?

The reverse-seared steaks should be served immediately with the side dishes and garnishes of your choice.

As you can see, reverse searing is not as complicated as some people think, and there is some pretty good logic behind reversing the traditional meat cooking method of searing it first and cooking it afterward.

With reverse searing, you can better monitor the internal temperature and doneness of your steaks and will get an even cook, tenderer meat and still have a beautiful brown crust at the end.

Let us know whether you have tried reverse searing and what you think about this cooking technique?