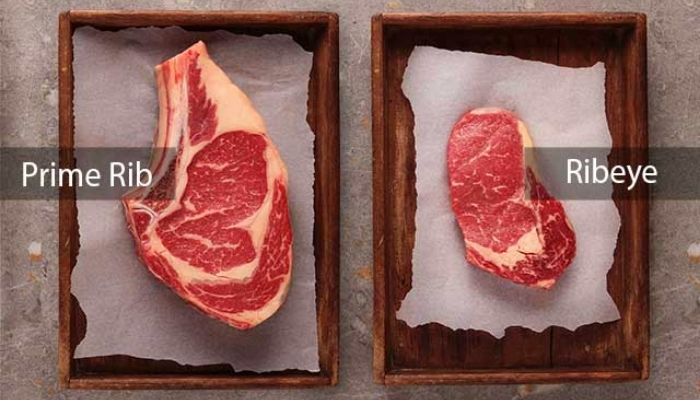 They may come from the same primal cut of beef, and their names may sound very similar, but the fact is that prime rib and ribeye are different cuts, which need to be prepared differently for the best results.

If you are wondering what the difference between these two fantastic beef cuts is, and which one is better in a head to head prime rib vs. ribeye competition, then read on for a thorough review of the features, pros, and cons of both cuts and how best to prepare them.

Prime rib vs. ribeye – what are the differences

Both the ribeye and the prime rib are cuts from the primal cut from the rib section of the animal.

While the prime rib contains larger parts of the rib and is a large roasting joint, the ribeye is a cut from the heavily marbled and much tenderer longissimus dorsi muscle found between the 6th and 12th rib. The Longissimus dorsi is the second most tender muscle from a steer and is a long and tubular muscle that is part of some of the best beef cuts, including ribeye, strip loin, top loin, and chuck eye.

When ordering prime rib, you will most likely be served with a rib roast beef cut. When ordering a ribeye steak, you will be served a steak that has been trimmed already and will be cooked according to your preference for steak doneness.

Prime rib vs. ribeye – the difference in the taste and the textures

Being part of the primal cut of beef, which is located in the beef rib area, both prime rib and ribeye have a rich and delicious beef taste. But the larger prime rib roasting cut usually has a more pronounced and robust beef flavor due to its inclusion of more bones, marbled fat, and connective tissue in the cut.

Since the prime rib is a beef roast cut, and the ribeye is a steak, they also differ in texture quite a lot.

Ribeye is milder when it comes to flavor and has a smooth melt-in-the-mouth texture and a buttery taste due to the marbling.

Due to the difference between the sizes of these cuts, they are usually prepared in different ways, which makes their textures quite different. The ribeye steak is usually reverse-seared or pan-seared at high temperatures for a short time, while the prime rib roast is typically cooked for a longer period of time at lower temperatures.

Prime rib vs. ribeye – the difference in their cost

Since the prime rib is a larger whole roast cut, it will cost more than what a single ribeye steak does when purchased in a store or at the butchers.

Here are some of the current prices for each by some of the best online butchers and sellers:

Keep in mind that rib roasts are usually harder to find in stores, where the smaller pre-cut steaks are preferred due to their easier storage.

On the other hand, when ordering them in a restaurant, you are more likely to pay more for the ribeye steak than from a slice of the prime rib roast, which has been cooked whole and then sliced into separate portions.

Prime rib vs. ribeye – which cut is better?

Whether prime rib or ribeye is better depends on your personal taste. Overall, both of them are some of the most popular and top-preferred beef cuts with rich beefy flavor and a smooth and buttery texture.

If you prefer traditional steak, then you may want to opt for the ribeye because the prime rib is cooked as a roast and then sliced into cuts.

What is prime rib, and how to best prepare it?

As mentioned earlier, prime rib is a cut from the primal beef cut and is a large-sized roasting joint with the rib bone-in. The prime rib is also often referred to as standing rib roast or beef rib roast. In some cases, the prime rib roast is cooked with the rib bones positioned vertically, which is why it is sometimes called a standing rib roast. It is often the centerpiece of all traditional holiday meals due to its delicious rich taste and beautiful marbling and juiciness.

For the best results, the prime rib should be roasted at about 200 degrees Fahrenheit for about five hours after searing it from the outside or until its internal temperature reaches the recommended 130 to 140 degrees Fahrenheit.

What is ribeye steak, and how to best prepare it?

The ribeye steak is a cut from the longest and underused Longissimus dorsi muscle of the cow, which runs between the 6th and 12th rib. The fact that this muscle is not used so much throughout the animal’s life makes it tender and yet marbled with intramuscular fat.

The ribeye steak may be referred to as a cowboy cut if it is served with the bone, and as a tomahawk when the complete rib bone is left in. it is also served as a Delmonico or a Spencer steak when it is prepared and served without the bone.

One preferred way to prepare a ribeye steak is by using a reverse sear. This is done by:

The prime rib and ribeye have similar-sounding names and come from the same rib section of the animal, but they are rather different cuts of meat.

The prime rib is a much larger roast which is sliced into juicy slices, while the ribeye steak is a singular cut of meat with a smooth and buttery taste and texture.

Each of these cuts is delicious when prepared properly. The preferred way to cook prime rib roast is at a lower temperature for several hours, while the ribeye steak is best prepared with a fast and hot pan sear or with a reverse sear cooking process.