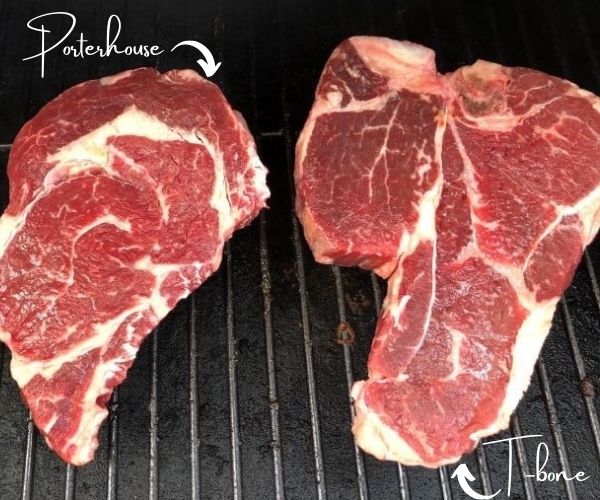 It’s impossible to talk of premium beefsteaks without mentioning the Porterhouse or T-bone. These two cuts taste so delicious and are a delight to share with family and friends. But do you really know the difference?

If you’ve mistaken one for the other, you’re not the first. Even the best of us make this rookie mistake given how similar they are. So we’re here to set the record straight.

First, Get to Know the Meat

With so much misconception about which is which, it’s no wonder a significant majority have no idea these are two unique steaks. To clear things up, the porterhouse and t bone are close cousins but not identical.

Both are generally cut from the short loin and feature a T-shaped bone which serves as a separation point between the NY strip and Tenderloin fillet. So, at first glance they look pretty much the same however here’s the difference;

This steak originates from the rear end of the carcass, closer to the back. It features the NY strip on one side of the bone, and the tenderloin fillet on the other, the difference being in the size of the fillet.

According to USDA standards, a steak with at least 1.24 inches of fillet at its widest point qualifies as a porterhouse. So judging by the measurements, this is a heavier cut that could weigh up to 24 ounces.

Because of where the porterhouse is cut, the NY strip portion of it tends to feature more intramuscular marbling than what a T bone steak gives. This in conjunction with the generous fillet mignon adds to a richer taste, the kind that melts in your mouth.

Unlike the porterhouse, the t bone is cut from the front end of the short loin. While the NY strip and tenderloin fillet is maintained side by side, the fillet size is much smaller coming in at about 0.5 inches at the widest point.

This is to say the NY strip and tenderloin portions are fairly balanced to some extent. And as far as the marbling goes, the t bone has little to none.

T-bone vs Porterhouse – Which Steak is Better?

It’s hard to choose given that both are great quality cuts that will turn any meal into a feast. Especially when grilled to a crusty bark, and pink medium-rare finish, they are definitely a crowd-pleaser.

The answer, therefore, comes down to your liking and preference. If you’re a fan of a big tenderloin fillet that’s soft and juicy, the porterhouse may be a better choice for you. But if you like the best of both worlds with a balanced ratio of strip and fillet, the T bone delivers nothing short.

You may also want to factor in how many mouths you’re feeding. The porterhouse is larger and can comfortably feed about 2 people. It’s going to spare you a whole amount of prep time if you have more guests, but when it’s just you, then a T-bone should suffice.

To help you make an informed decision, here are other components that might give a clear distinction as to which works best for you.

Given the sheer size of the fillet portion in the porterhouse, it’s no surprise that it comes with a steeper price tag. The tenderloin is one of the most tender, buttery cuts and will right away melt in your mouth once cooked.

The t bone comes in at a close second however not within the exact price range. Remember it’s not the size of the steak that guarantees superb quality but the constituents therein.

Another detail that could vary the price is the grading. You know you got a great steak if the label reads USDA prime. This is more superior to USDA choice and could cause a slight upgrade to the average cost.

To add on, if the steer was grass-fed or organic, this too is enough to cause a price hike. In that case, it’s not absurd to have a USDA prime grass-fed t bone steak costing more than a USDA choice porterhouse.

Doesn’t matter how distinct the size difference may be.

As mentioned earlier, as much as both are cut from the short loin, the particular chopping areas are far from the same.

As for the t bone, the tenderloin tapers across the front end of the short loin, and as a result, the fillet comes off smaller. The porterhouse conversely reaps off a larger portion which extends to one and a half inches wide.

Still on the sourcing differences, is that the NY strip in the porterhouse is typically cut from a nerve end. There’s more fat marbling across this section than in that of a T-bone.

As you can imagine, both cuts appeal to different audiences depending on what the buyer is looking for.

As far as proportions go, you are likelier to have more than enough leftovers with a porterhouse on the menu. So if you’re thinking of throwing a thanksgiving dinner with a beefsteak centerpiece, the porterhouse will reduce the number of kitchen trips needed to prepare a meal filling enough for your guests.

Plus, who doesn’t love leftovers the next day?

If you’re still struggling with differentiating the two cuts just from appearances, there’s an easier way to go about it. Simply read your label. The United States Agriculture department provides an IMPS (Institutional

Meat Purchase Specifications) the number for all USDA-approved meat labels.

The code 1173 implies the steak is certified as a porterhouse, while 1174 shows it is a T-bone instead. If you’re buying straight from the meat market, then you can expect raw pieces just lying there waiting for you to pick. And in such instances, your butcher is your best bet when things get confusing.

But in the meantime, when shopping from supermarkets or online vendors, the codes above will come in handy.

Being that the cuts are slightly different, the method of preparation will vary as well. You’re allowed to apply techniques outside what we’re about to show you, but these have been found to work exceptionally with the given steaks.

As a thumb of rule, add some black pepper and salt before starting to cook and if you like, you could smear your favorite seasoning or dry rub as extras.

The nature of this steak is leaner compared to its counterpart. This is a good thing for hot and fast grilling because it’s easier to handle the meat without drying it out. For your BBQ, give under 5 minutes for each side, while carefully rotating the steak.

You want it to get those nice grill marks that will turn the outside crusty, but not so much that the moisture gets lost.

If you have a problem controlling your fire, the 2 zone cooking method is a better alternative. Begin by cooking low and slow with indirect heat before finishing it off on the grill. It’s a safer way of searing that will leave the perfect pink center on the inside.

For this, the risks run higher. Naturally, the steak is hefty and you may have a problem maintaining consistent temperatures across the beef if you just toss it into an open flame directly.

Rather than ruin an expensive cut, try the Sous Vide method instead. Wrap your steak in an airtight plastic bag and submerge it in a warm water bath. Give it a while and let the inside cook evenly with no hurry before transferring it onto the grill for the final touch.

Sear both sides enough to notice a golden brown bark and you’re all done!

For both, allow some resting time before hurrying to slice the beef up. This helps to redistribute the juices back to the steak rather than gushing it all out. Proceed to serve with your favorite side dishes and enjoy!

To really tell the difference between these seemingly similar steaks, refer to the size of the fillet portion. And if that doesn’t help, the code numbers might pull you out of confusion. The next time you’re out shopping for your beef steaks, you should be better off navigating the different kinds. Good luck!