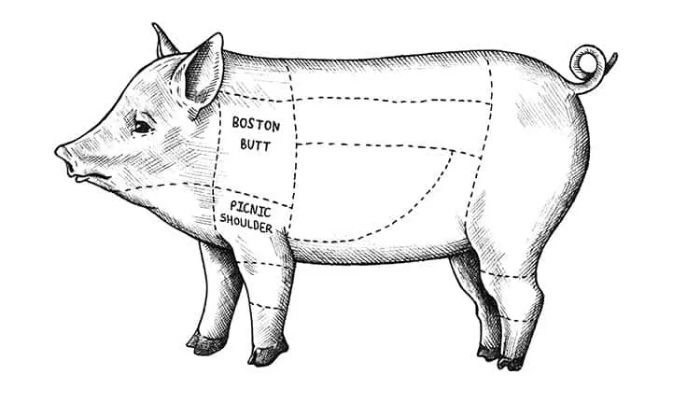 It’s not entirely your fault if you stepped into the store and walked out with the wrong pork cut. Pork roasts are several but it gets even more confusing when the names don’t resonate with the location from which they’ve been cut.

Quick example, when you hear of “butt” naturally, your mind thinks of the rear end. Unfortunately, in pork terms, this is not the case. On the contrary, the pork butt is entirely a different cut not anywhere close to the typical butt.

We’re here to demystify this mystery and hopefully bring clarity to the various cuts. Next time you make a trip to your butcher, you’ll have your parts right and your lingua straight!

Are Pork Shoulder and Pork Butt the Same?

The quick answer to this is no. As we’ll get to see, the two are quite different in many ways even though they are chopped from the same primal cut.

If you have no idea what that means, here is a quick briefing. When a carcass is being dismembered, it is first chopped into large portions. These are what we refer to as primal cuts, usually 9 in number.

Both the pork shoulder and pork butt are retrieved from one of the primal cuts. This muscle is known as the front shoulder. It runs from the shoulder blade of the pig narrowing down to the front of the hoof. But here’s the catch. The limb is further split into sub-primal cuts and this is what separates the shoulder from the butt.

The upper portion right behind the neck of the animal is what makes up the pork butt. While what we call the shoulder is the cut beneath the butt.

As you take a minute to wrap your head around this anatomy, let’s delve deeper into a few more facts to shed light on the same.

You may be more familiar with the terminology Boston Butt. Well, it’s the same thing. Structure-wise, the cut takes to a more even rectangular shape.

As discussed, the pork butt is closer to the chuck sitting right on top of the shoulder blade. This portion is a top pick because of its innate tenderness. The butt, unlike other muscle groups, is underutilized and as such tends to come off softer.

You will find a high amount of marbling in between the tissues (roughly 70/30 meat to fat ratio) which is a good thing because during cooks the fat renders a buttery texture. Because of this trait, the butt makes a superior candidate when it comes to assembling sausages.

The pork butt can either be sold boneless or bone-in depending on how you like it. At the same time, it can also be cooked in whatever form- whole, as steak, ground, or shredded. It’s one of those versatile meats that can take to multiple cooking methods, as long as you know your way around your cooker.

Read further on our recipe for a smoked pork butt.

The pork shoulder is also commonly interchanged for picnic shoulder or picnic roast. Unlike the butt, it takes to a triangular tapered form. Seeing as it may be hard to keep up with all the synonyms, whenever you’re not sure, seek guidance from your local butcher.

The nature of this subprimal cut is rather tough. As mentioned, it sits at the lower end of the front leg just below where the butt ends. This muscle group is exposed to a lot of activity and as such, it takes to a tougher form.

It goes without saying that a low and slow approach is best suited when cooking. Even more so because this cut is almost always served bone-in and skin-on. Unless you’re up for a severe rind and intense jaw work, the only cure is unhurried cooking.

Check our full guide on how to smoke pork shoulder.

When to Use Boston Butt

If pulled pork is on your recipe, then the pork butt should be first on the list. This is because it is softer and as such will rip apart with ease. All you need to do is take out the bone in case you bought the cut with it, and trim the pieces to equal sizes.

The butt can be used with various cooking methods too. Whether hot and fast grilling, smoking, or the more popular low and slow technique. Either way, you will almost certainly achieve pull-apart tender results.

When to Use Pork Shoulder

The picnic roast makes a better selection for when you are making crispy pork recipes. On high heat especially, the skin sears to give a nice golden brown crust.

You can’t quite rock the boat with a shoulder though. For edibility purposes, controlled approaches such as braising, roasting, and the likes are recommended. So even with reverse searing, it can only be a finishing step after the muscle fibers have broken down.

Some of the best pork shoulder recipes include pulled pork tacos, Chinese BBQ pork, or as an entire roast.

In conclusion, pork butt and shoulder are distant relatives. The decision to buy either one will largely depend on what dish you intend to make. Hopefully, you are now more informed on how to go about your pick.