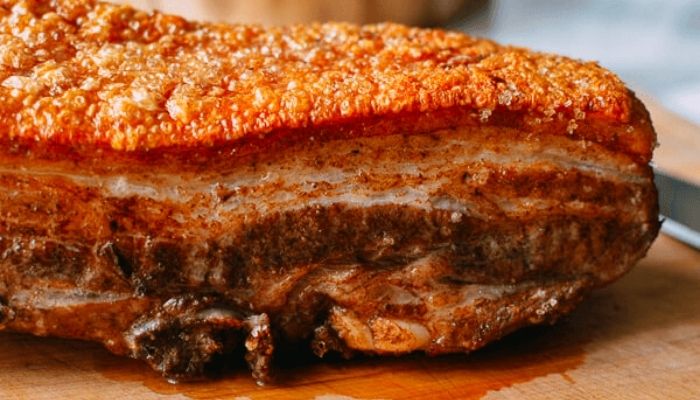 Pork belly and bacon, it’s easy to mistake them to be the same. After all, they share a common source. The underlying truth, however, establishes that the two are different in their own rights. Fair enough bacon may be a close cousin to pork belly but still, it would be wrong to classify these as identical.

If you are interested in finding out what differences exist, stick along for some interesting facts. It’s worth knowing exactly what you’re asking for, next time you make a trip to your local butcher.

Comparison between Pork Belly and Bacon

To start, let’s begin with where you will locate either one. As for pork belly, it pretty much is straightforward. This is the flesh that runs on the underside of a pig. But contrary to what some think, it does not include the internal stomach or intestines. Instead, it merely refers to the surface area around and under a pig’s belly.

From a healthy animal, you could pull out a thick slab as heavy as 12 pounds. Using basic calculations, this may be enough to feed almost twice that number of people. This is barely the case with bacon. Typically, commercial bacon is sold in thinner strips. Even unsliced versions do not weigh anywhere close to this.

Bacon can be sourced from pork belly, and by the US standard, the cuts are exclusive to this rule. If you are careful enough to pay attention to the packaging, you may have come across the word, “streaky bacon” a very common cut specifically obtained from the belly. But as we’ll see further along, several other cuts exist as well as variations.

In many instances, you will see bacon being used to assemble quick bites like hotdogs, burgers, or other times as a building block to the main dish. In itself, it may not suffice as a core dish due to its lean profile. Unless you’re willing to part with huge sums of money to satisfy hungry stomachs with just pork strips, you’re likely going to be having it as a snack.

Being that pork is generally a fatty type of meat, the same extends to cuts obtained from it. Whether pork belly or bacon, the fat concentration is significantly higher compared to other steaks. Try cooking on your grill or oven and there’ll be a lot of grease pools to drain/ blot.

Onto the distinguishing factors;

In case you didn’t know, bacon can be sourced from other parts of a pig and not just the belly. Further from this, there are non-pork variants, as well, common in different parts of the world. For instance, chicken, lamb, or turkey bacon, just to highlight a few. They tend to be common amongst consumers who do not eat pork.

Other parts from where you can equally cut bacon include the chuck (shoulder and sides) or rear end (butt, back, and loin). How to tell where your store-bought bacon originates from is by simply reading the fine print on the back label.

i. Slab Bacon – manufactured from side cuts. Is cheaper.

ii. Back Bacon – is less fatty and obtained from the loin

iii. Cottage Bacon – from the shoulder.

iv. Jowl Bacon – originates from meat around the cheeks

Bacon is cured unlike pork belly

If you’ve tasted bacon before, the strong salt concentration sticks out like a thumb. This is because it goes through a curing process to increase shelf life. Here, special curing salt is used to draw out moisture thereby prolonging its longevity.

On average, the curing process lasts about 7 days before being left to dry for another 24 hours. This may vary with the size of the animal you’re working with.

Pork belly on the other hand has no additives whatsoever. It is chopped up and served fresh in the store or butcher. Because of lesser production complications, it is sold cheaper. Bacon comes with a higher price tag for the extra fermentation and wood smoking.

That’s right. US commercially sold bacon often has been partially smoked but that does not mean it comes ready to eat. Cooking is mandatory to kill any lingering bacteria that would otherwise provoke illness.

If push comes to shove, you could save a couple of bucks making your own bacon from pork belly. Simply prepare brine, let it soak in for a few days, dry up, before cutting your slices.

This is owing to the high-fat amounts that cause the meat to melt away in your mouth. Although bacon has some decent fat concentration equally, it is not to be compared to that of the underside.

Cooked properly, the belly is smooth and tender except for the skin. Even so, it should break down to a chewable consistency when prepared on low heat and slow.

Judging by health standards, the lesser sodium amounts in the pork belly elevates it to premium quality. At least when compared to bacon. However, on the flip side, the fat concentration is not to be overlooked.