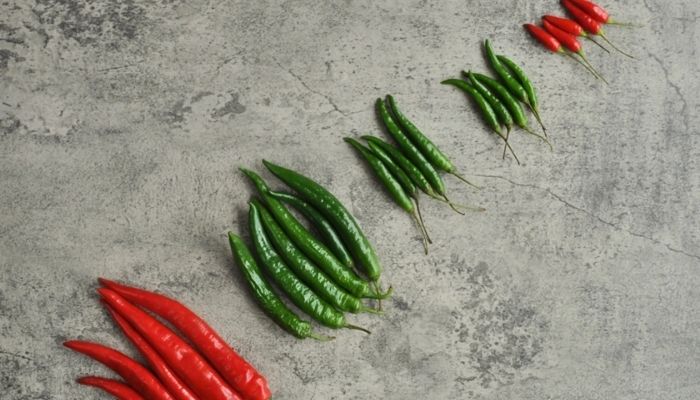 Wondering what the pepper Scoville scale is and how the Scoville Heat Units (SHU) is measured? Or are you wondering which the hottest pepper according to this scale is?

Read on to find out more about the history, how it is measured, and what is the hotness of the most popular chili peppers according to this popular hotness scale.

What does the Scoville scale measure?

This is a scale for measuring the pungency or heat of chili peppers in Scoville Heat Units (SHUs). Since it relies on the taste of testers, this scale is quite subjective, which is why you can find some variations in the SHU measurements of different peppers found at other sources.

The invention of the Scoville scale and its modern use

The Scoville scale was first invented in 1912 by Wilbur Scoville who was an American pharmacist.

Scoville devised a simple way to measure the heat and pungency of hot peppers.

The test relies on human testers (it is an organoleptic test), and in simple terms, involves finding the answer to the question – how much parts of sugar water need to be added to a piece of ground chili pepper in order to make it stop burning when placed on the tongues of the panel of testers.

What is the hottest pepper?

The hottest pepper according to the Pepper Scoville Scale at this moment is the Carolina Reaper. This shriveled red chili pepper has a 2.2 million SHU and has been certified as the hottest pepper by the Guinness Book of World Records.

Rumors are that there is a newly developed contender that goes by the name Pepper X which has an even higher SHU of 3 million, but it is still in the process of development and testing.

Could there be dissension in the ranks?

As we mentioned earlier, because the Scoville Heat Scale is based on testing by humans, the results can be pretty subjective as they rely on the taste buds of individual people who, while they pass through training before the organoleptic test, can end up with varying taste results. This is why there are differences in the rankings and measurements provided by different sources.

There is a more accurate test that does not rely on humans to measure the hotness of peppers, which is known as High-Performance Liquid Chromatography. It measures the pungency in Asta Pungency Units.

What SHU range is hot?

Overall, whether a pepper is hot, super-hot, medium or mild depends on the personal taste and on whether the person tasting is new to hot peppers or is a hot chili pepper freak.

As a whole, we may conclude that peppers which are up to 5,000 SHUs are mild. These include Bell, banana, Paprika, Ancho Poblano, Cascabela, Jalapeno, Poblano, and more.

Medium hot peppers are those with 15,000 to 350,000 SHUs and include Cayenne, Thai Hot, Habanero, Scotch bonnet, and others.

Super-hot peppers have a heat of over 876,000 SHUs and can reach up to 2,200,000. These are the Carolina Reaper, Trinidad Scorpion, Ghost Pepper, Dorset Naga, and more.

We hope that we have helped you understand how the Pepper Scoville Scale works, and which peppers are considered mild, which are medium hot, hot, and those that are super-hot.

Of course, how hot chili pepper is for you depends on your experience with eating spicy foods, so the best way to find out which peppers are the ones for you is to try them out, starting from the milder ones and moving on to hotter ones, but with caution.

Related: How To Make Your Own Smoked Paprika At Home