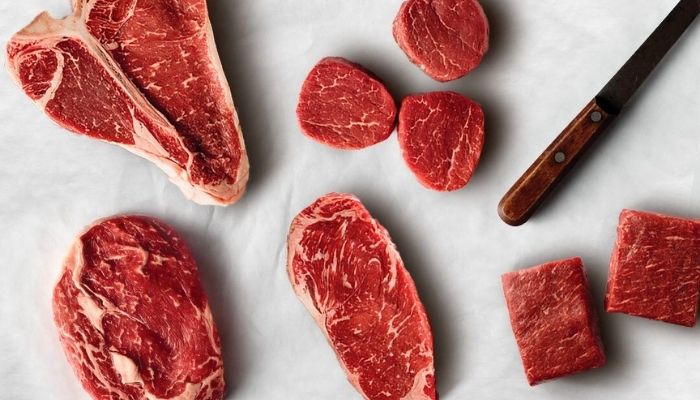 When you’re deciding between varieties of cuts you should understand the inherent properties so you can make an informed choice. That’s exactly what we’ll be doing today. Demystifying the controversy between two often confused steaks; New York Strip and the Ribeye. If you thought steak is steak, think again. The two have unique differences when you examine closely. And you’re just about to find out!

Side by Side Comparison

Before we get to the disparities, it would be incorrect to assume that the Strip and Ribeye have nothing in common. On the contrary, it’s the whole reason why the majority mistake them to be the same. That said, here are a few common properties.

At first glance, the cuts appear to take to a similar shape and size. It gets tougher when the ribeye is served with bone-in meat because the Strip is known to be one part of T-bone steak. If you don’t have a keen knowledge of your beef, you might get mixed up at the butcher.

Both are generally thick with a generous dose of fat going on. It’s no wonder you get that tender juicy bite melting away in your mouth.

Again, you’re going to be paying a pretty buck for either one. These are a few of the premium cuts out there and the higher the grade you go, the more expensive they are.

They are sourced from a general area which is the back region of a cow.

Fair enough they come from almost one conclusive part but there’s a catch. The pair of muscles that run down the backbone and outside the ribs is scientifically referred to as longissimus Dorsi. From here, the Strip is cut but mainly from the rear end while the rib eye is retrieved further up close to the neck just next to the upper ribs.

The location from which the Strip is obtained is known as the short loin primal and you will often find it beneath the backbone far behind. Sometimes, depending on where exactly the rib eye has been chopped, you may find traces of the spinal muscles in there.

To get the best of ribeye, aim for the region where the ribs stretch from rib six to twelve. It’s been known to produce the prime genre and you can bet it will taste incredibly tasty.

The quickest way to tell the two apart is by looking at the surface. If you’re keen enough you will notice that the Strip has a fat band going around one side while the other features more of intramuscular fat. That goes to say that the marbling in the Ribeye is richer and consistent all through.

Because of the tough fat rim that in most cases is layered with adjacent cartilage, most home BBQ enthusiasts tend to trim it off as it is ideally not the best to try to chew on. But, if you fancy the flavor it brings on, sure, you could keep it.

As you can imagine, the fat disparity tends to play a hand in how the meat cooks as well. We’ll see further on how best to cook each one but in the meantime understand that a ribeye is by far a more forgiving cut to work with.

The fat penetration all through allows for a greater margin of error you could say. Unless you’re an amateur it’s typically very hard to go wrong with a ribeye.

Texture-wise, greater marbling translates to a smooth, buttery feel in your palette. If you like something firmer with more chew to it, the Strip should be your first pick in that case. Now, this is not to mean that you’ll end up with an overly tough lump of meat. Cooked correctly, it should have a substantial amount of giving. What we’re saying here is that the former is likely to end up moister even if you accidentally surpassed the cooking time.

How to Cook Either One

Speaking of cooking, as mentioned earlier, the Strip and Ribeye take the best to different approaches. Unless you have a great deal of experience dealing with either, it’s probably best that you heed the instructions below. Let’s begin with the Ribeye.

Whatever outdoor cooking appliance you’ve got, set it up in a manner where there’s both direct and indirect heat. If you’re using charcoal, heap the lumps all to one side of the grill, and if it’s a burner, have one knob turned to a high while the other maintains low.

The hottest side is responsible for working up that golden-brown crust while the cooler heat will slowly bring the internal temperatures to the desired level of doneness. Invest in a digital thermometer if you don’t already have one. Staying on top of those temperature points can either make or break your BBQ.

Another way of cooking low and slow. Only this time you’re first going to toss your cut into the oven and finish the cooking in a smoking hot pan. Have your probe thermometer close by and push it through to the center of the beef. Only when the steaks have reached the desired temps at the center do you take out and sear.

If you’re cooking a medium-rare, target about 95F before pulling out of the oven into your hot pan. Garnish with your favorite condiments (butter, garlic, thyme) and sear away!

Do it Hot and Fast

Being leaner meat, there’s lesser room for mistakes. Cooking over a hot fire and speedily is one way to rule out common errors. Plus, because of the lower marbling, it makes the perfect recipe for a grill due to reduced flare-ups.

Bring your grill up to about 900F before laying on the steak directly onto the grates. It’s a hands-on method so have your tongs close by to flip the meat every 30 seconds. You will know your Strip is ready when the internal readings tell you so.

Here, ensure the oil on your pan is extra hot. With this approach, you need to factor in the resting time. Remember, the temperatures jump even after taking the steak out of the pan so have some allowance for the same. About a 5F deviation from the ideal temperature should be good. And before plating it up, drizzle the dripped fats onto the steak again.

What to Look Out for When Buying

The choice of a premium grade will always render tremendous results. They may be a bit pricey but if you can afford it, the outcome is worth it.

Particularly for the NY Strip, seeing as its fat density is selective, be on the lookout for even widths all across. Irregular evenness or narrower sections could affect how they cook, and possibly even dry out the beef.

If you’re not sure what names they go by in your local area, do a quick internet search. You want to be sure you’re getting the right cut. For instance, in French, the Ribeye is popularly known as Entrecôte, while in Australia, scotch fillet. In the US without bone, it’s called the Spencer steak while a cowboy cut is when cut with bone.

As for the NY strip, common synonyms include Kansas City Steak, Shell Steak,  and Top Loin Steak just to mention a few.

Which One is Better?

All things considered, both are impressive selections and there’s not a huge downside to choosing one over the other. This is where it boils down to your liking. If you fancy moist, smooth, and fatty go with a ribeye. But if you like to feel your teeth or jaws moving around more, the Strip is more ideal. Either way, from a neutral perspective, you’ll enjoy a robust flavor with whichever you pick!