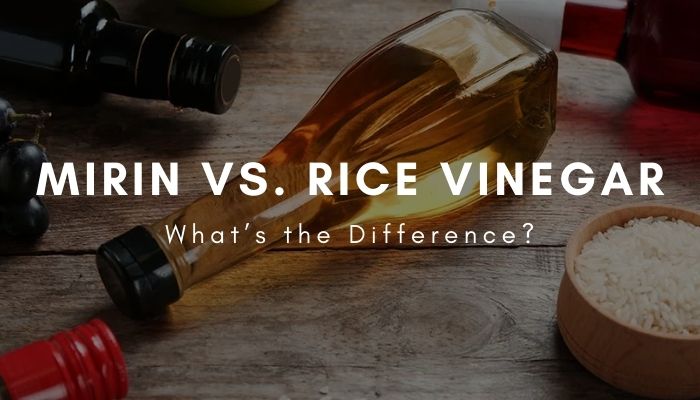 Vinegar is the most common of all acids, and it can be made from any type of alcohol by fermenting it with bacteria.

Vinegar ranges in color from clear to dark amber, depending on how long it’s aged. The longer you let vinegar age, the stronger and sourer its flavor becomes.

What’s the difference between mirin and rice vinegar?

Well, if you ever wondered that, then wonder no more because we’re going to tell you!

Both kinds of vinegar are a product of fermented rice, water, and salt. However, the process used to make both is different.

Mirin (sweet cooking wine) is a traditional Japanese condiment made from glutinous rice and used to add sweetness and flavor to certain dishes. Mirin has a sweet taste and contains about 14% alcohol.

On the other hand, there is rice vinegar which is made from fermented rice. It’s tangy and more bitter vinegar with a consistency close to that of white wine.

Both of these ingredients are used in Japanese cooking, but there are differences that we’ll talk about below.

The main difference between mirin and rice vinegar is that mirin is sweeter than rice vinegar, but the latter has a lower alcohol content. Other differences are in consistency, flavor, color, and how they’re used. 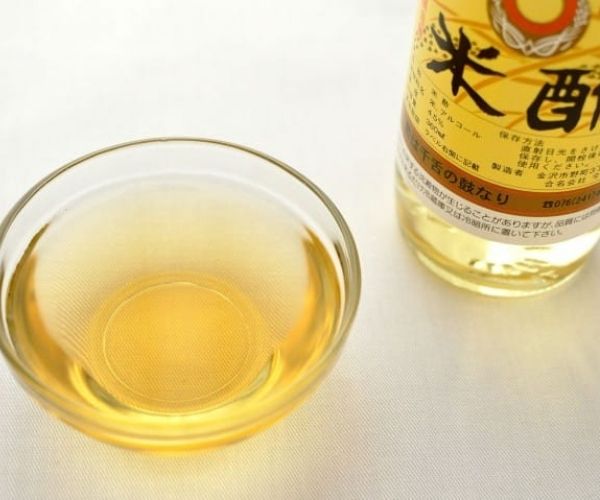 Rice vinegar is made from fermented rice, salt, and water. It’s often used in salads and with other foods to give them a tangy taste. Rice vinegar also comes from Asia. It is most common in Vietnam, China, South Korea, and Japan.

Rice vinegar is prevalent mainly in Asian cuisine. It could be used with other foods to give them a tangy taste. It is often used in mixes like salad dressings or sauces.

The major distinction between rice vinegar and regular vinegar is that it’s produced differently. Rice vinegar is less acidic and has sweet and mild tastes.

There are three kinds of rice vinegar, red, white, and black.

Rice vinegar has a very low alcohol content. During the cooking process, any alcohol it may contain will be destroyed.

Sometimes rice vinegar is gluten-free, and sometimes it is not. It depends on the technological process that is used. For people who cannot eat gluten, it may be a good idea to check labels.

Compared to mirin, rice vinegar contains more sugar, yet it has a tangy taste with a small amount of sourness and sweetness. This tangy taste is the reason rice vinegar is seldomly used as a condiment. It shines when used as part of different marinades or sauces. It works great when mixed with soy, ginger, lime, sugar, and sesame.

Rice vinegar goes well with Asian food, especially vegetables and rice dishes. It is often used in Chinese, Japanese, and Korean cooking. This vinegar could be used on meats (used with other ingredients), but it’s better on seafood, soups, or noodles.

The primary components in rice vinegar are fermented rice, salt, and water. It’s often mixed with other ingredients for flavor.

Rice vinegar is relatively low in sodium, making it a good option for those who need to watch their salt intake.

Rice vinegar can last a long time if it is stored properly. It should be tightly closed and kept away from direct sunlight or heat sources. Exposing rice vinegar to light may cause a chemical reaction that will turn it into a dark color and ruin the taste.

The flavor of rice vinegar is less sour than ordinary vinegar. It’s preferable to utilize rice vinegar in blends that include other materials for the sake of creating a distinct taste.

Rice vinegar can be used as a part of cooking ingredients or as an appetizer or salad dressing. It is commonly combined with soy sauce and kombu for Japanese dishes, such as sushi rice, Gomoku sushi (rice mixed with vegetables), or Oshinko (pickled vegetables).

Rice vinegar is used mainly in Asian cooking, yet it could be used in some other dishes as well.

Here’s a shortlist of foods that could be accomplished by rice vinegar:

When utilizing rice vinegar in actual cooking, you have to be cautious about the measurements because it is weaker than ordinary vinegar; thus, a little goes a long way.

Rice vinegar could be also used for cleaning and to cut odors. It is non-abrasive and contains acetic corrosive and antibacterial properties. The vinegar and its bubbling action break down soil, stains, expulsion cleaners, and deodorizers. 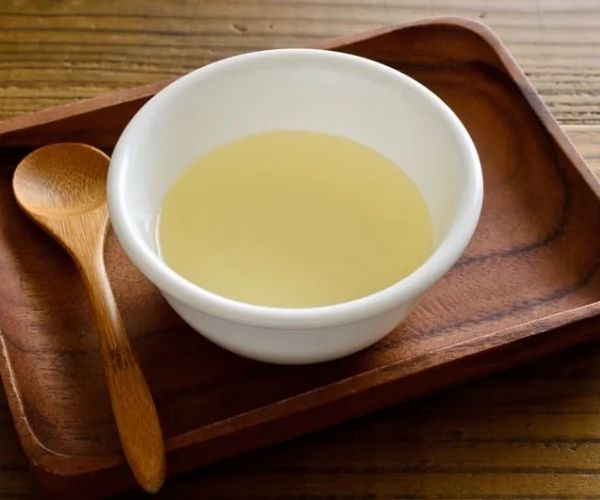 Mirin is a cooking wine used for centuries as a sweetener and preservative, is a fundamental element in many Japanese dishes. Dark mirin has thickened into a syrupy consistency that darkens as it ages; light mirin, on the other hand, remains thin and golden.

Mirin has an alcohol content of around 14%. It adds richness to whatever it is being added to and brings out flavors that would normally not be tasted.

Here are the three main types of mirin:

When buying mirin, always make sure the product is not a mirin substitute — a mixture of sugar and rice vinegar — but real mirin. Mirin substitutes are usually made of corn syrup, vinegar, and sugar, which is unhealthy for human consumption.

To reduce the alcohol percentage, you can boil mirin. The alcohol will evaporate during the boiling process.

Mirin is often used in many Japanese recipes, including teriyaki dishes, glazes, soups, sauces, and dressings. It magnifies the flavors and brings out the natural sweetness of whatever it is being added to.

Mirin has a high sugar content (45%), making it a good preservative for food and an ideal addition to many dishes. It is often used in pickling, glazing meats, or marinating fish because it helps prevent spoilage from microorganisms.

It brings this authentic umami taste to your dishes. Mirin is an integral part of Japanese cooking; you can’t make sushi or teriyaki without it!

Since mirin is made only from rice, salt, and water, it is entirely gluten-free. Yet, always check the label for some added wheat or malt, which will make the mirin not gluten-free.

The Japanese use light mirin is primarily for cooking. It adds flavor to the food and prevents the oxidation of ingredients; therefore, it is suitable for uncooked dishes like salad dressing or sushi dipping sauce. Mirin also brings rich taste with all this umami sensation.

Even if mirin is sweeter than rice wine, it contains three times more salt. Yet, the sodium levels are still relatively low, so don’t be afraid to use it in your cooking.

The best way to store mirin is at room temperature, out of direct sunlight, and away from any heat source. Make sure the container you have is tightly closed before storing.

For cooking, mirin is mainly used to make teriyaki, as a glazing agent or dipping sauce for sashimi and sushi, as a cooking wine in soups and simmered dishes, or stir-fry dishes.

Mirin could be defined as wine that is sweeter (about 14%), saltier (about 1%), and more aromatic than regular sake. It contains alcohol but also has sugars, starches, acids, and minerals. This combination of properties allows mirin to be used like wine to make marinades, sauces, or simmered dishes with meat or vegetables to infuse them with a subtle sweetness and fragrance.

Mirin is also one of the ingredients used for making sweets, such as daifuku (a soft rice cake wrapped around Anko sweetened red bean paste). In fact, mirin is found in many traditional Japanese confections and other types of desserts. However, these sweets’ distinctive flavor and fragrance is typically not due to mirin alone but rather a combination of mirin and other ingredients.

Mirin brings this specific umami-rich taste to cooking. Umami is called one of the five basic tastes and is often described as sweet, sour, and salty. Umami-rich dishes are essential in Japanese cuisine, where they are used to enhance other flavors.

Here’s a shortlist of foods that could be accomplished by mirin:

There are likely many more uses of mirin in cooking, but the simple list above shows some of the different ways that mirin can be used. 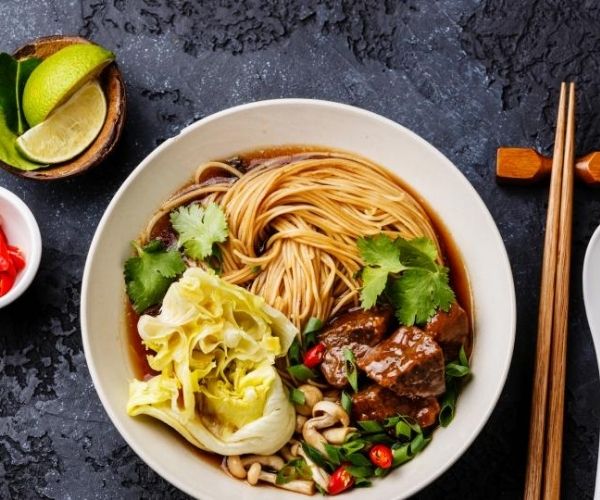 Even that both are often used in the same dishes, they are different in taste and texture.

Rice vinegar is clear and has a sharp, acidic twang, while mirin is much sweeter and has umami richness.

Rice vinegar can be substituted for mirin if you reduce the amount to half (for example, if a recipe calls for one tablespoon of mirin, use a half tablespoon of rice vinegar).

Mirin is also available in gluten-free varieties. Rice wine that contains wheat should not be used as a substitute because the taste will be very different (similar to using apple cider vinegar for balsamic vinegar).

Rice vinegar is alcohol-free, while mirin contains 14% of alcohol.

Mirin may also be used as a dipping sauce on its own, while rice vinegar is not used alone.

You can use rice vinegar for cleaning purposes, while mirin could be used only in the kitchen.

While these products are made of similar materials, there are differences between them. We hope this information helps you make a choice at the store, and enjoy your product!

Is Rice Vinegar the Same as White Vinegar?

They are similar products but not the same. Rice vinegar is made from rice and water and has a milder flavor than white vinegar, distilled and clear with a sharper acidic twang.

What’s the best Substitute for Mirin?

You can substitute mirin with rice vinegar if you reduce the amount to half. Yet, they are better solutions like sweet marsala wine, dry white wine, or dry sherry.

Is it possible to get drunk from mirin?

Yes. In fact, mirin contains 14% of alcohol, similar to a bottle of wine. When used in cooking, the alcohol will vaporize.

As long as you don’t drink the mirin from the bottle, you should be fine.

They are some Japanese who use it as a drink. So, please be careful! Due to its high alcohol percentage, it is definitely possible to get drunk.