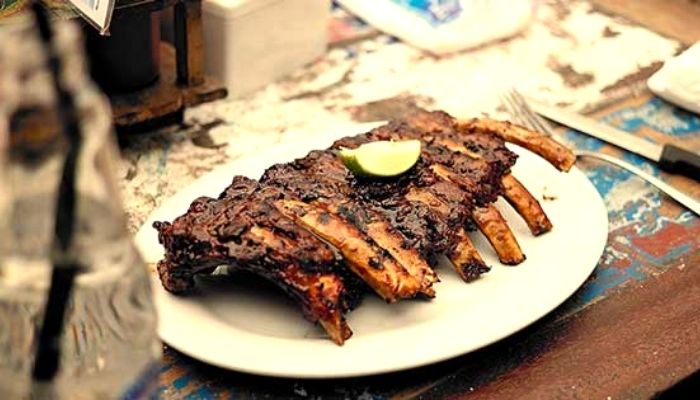 Ribs are a common delicacy that can be prepared in more than one way. Smoking, barbecuing and grilling are some of the many ways of ribs preparations. It’s not rare to have ribs leftovers after everyone has had their share and tummies full.

The main question is how do you store ribs? Another question rib lovers ask frequently is: how do you reheat ribs? Reheating ribs can make them dry and lose flavor when done in the wrong way.

This article covers some of the most recommended methods of reheating ribs as well as storing them. When done right, your ribs are likely to retain their taste as well as tender texture.

How to Prevent Ribs From Drying Out Before Reheating 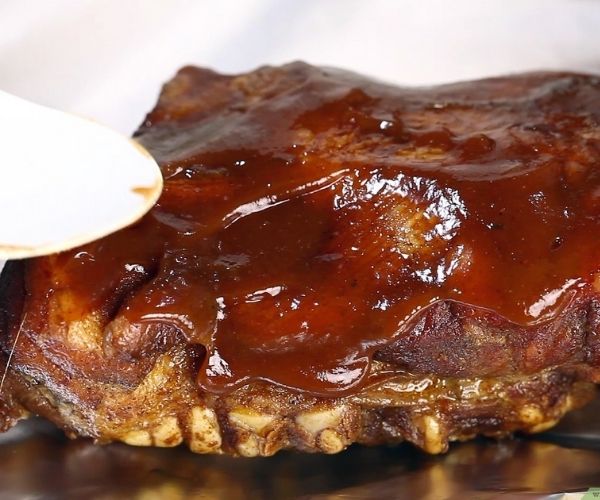 Proper storage plays a major role in retaining the ribs’ softness during reheating. Whether refrigerating or freezing, you have to take necessary precautions. Ensure that the ribs’ moisture remains intact.

Below are tips on how to lock in the ribs’ moisture and prevent dryness through proper storage.

Before putting the ribs inside the freezer or refrigerator, put them in a container that has a lid or a storage bag with a ziplock. A bag that has a vacuum seal is also ideal for this type of storage.

The container lid, ziplock, and vacuum sealer are put in place to prevent the ribs’ moisture from escaping. This means that by the time you are taking them out for reheating, they will still be moist.

High temperatures draw out all the moisture retained in the ribs during storage. This leaves the ribs dry after reheating.

Reheating the ribs slowly on low heat helps maintain the moisture. It also ensures the retention of the flavor acquired when the ribs were prepared for the first time.

Immediately you’ve realized that no one wants more ribs, it’s time to take the remaining ones into the refrigerator.

It’s best if you do that sooner than later to prevent the ribs from exposure to bacteria. The ribs are also likely to develop another protective skin over them. This happens after all the moisture is withdrawn from being exposed to air for a long. The new outer skin decreases the chewiness in the ribs when they are later reheated.

Chop the ribs into small portions before sealing them inside the packing bags. This makes it easy for the cold air to reach every part of the ribs.

The ribs are bound to lose a big percentage of their moisture when in the freezer or refrigerator. Reheating and cooking can also drain out the remaining moisture.

Adding coke or broth while reheating beef ribs is advisable to bring back the lost moisture. Cider vinegar or apple juice blends well with pork. It not only moisturizes the ribs but also gives them new flavors.

Here’s an article describing the different types of pork ribs

How to Reheat Ribs using an Oven

An oven is the most popular kitchen appliance used in reheating ribs. There are different steps to follow during ribs’ reheating. When followed well, these methods help the ribs retain their moisture, texture, and original flavors.

How to Reheat Ribs using the Sous Vide Method 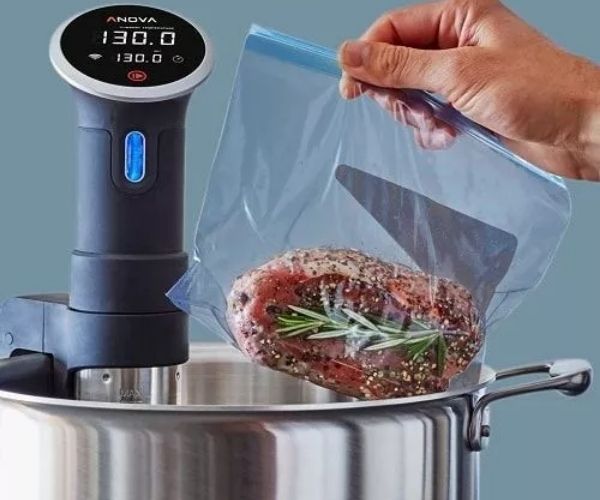 A method where food packaged in air-tight vacuum sealer bags is placed in a hot water bath is called Sous Vide in French. The term ‘Sous Vide’ is translated to ‘under vacuum’ in English.

Some cookers are designed for this type of reheating. However, you can create one as part of the DIY activity.

The Sous Vide cooker is designed for this type of reheating. All that’s required of you is to place the vacuum sealers containing the ribs inside it. Set the required temperature and leave the ribs to reheat for the recommended time.

It’s also important to note that, when using the Sous Vide method of reheating, moisture in the ribs is not likely to escape. Vacuum sealers are airtight and they retain the ribs’ moisture from the time of storage until they are reheated.

The Sous Vide method does not expose the ribs to direct heat. It is therefore not necessary to add any liquids before reheating the ribs.

How to Reheat Ribs using an Air Fryer 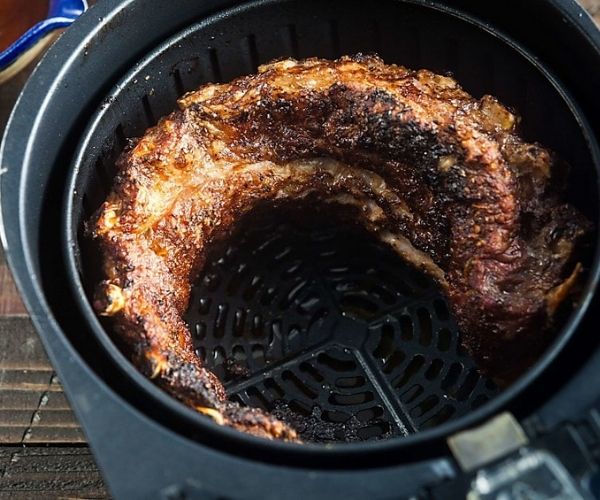 A cooking appliance that has concentrated air in it is referred to as an air fryer. It is made using the same technology as a deep fat fryer.

The air inside the air fryer is heated to the set temperature. It then circulates over the ribs put inside the fryer, making them hot as well.

An air fryer reheats the ribs into crusty exteriors. For this reason, it is not suitable for ribs that have been soaked in sauce prior to reheating. It works well on ribs that have a dry rub on them.

How to Reheat Ribs using a Steamer

A steamer keeps the ribs moist when they are reheated in it. Instead of drying out, the ribs end up basting in their liquids, especially if they were stored right.

Check our material for the different types of beef ribs

Is Reheating Ribs in a Microwave Recommended?

There are many conspiracy theories when the topic of reheating ribs in the microwave arises. Some argue that it is okay to do that while others warn against it.

Using the microwave to reheat leftover ribs may not be the best option, but it causes no harm. The downside of this method of reheating is that the microwave does not reheat the ribs evenly on all parts. It also causes them to become dry.

Below are a few ‘tricks’ can be incorporated to reduce the drying out effect on the ribs. This guarantees better results.

Wet paper towels prevent the ribs from drying. This is due to the steam produced from heating the water on them. This steam keeps the ribs moist.

Paper towels are also used to absorb the fats released by the ribs. They prevent the fats and sauce from spilling out into the microwave.

As discussed above, proper storage of cooked ribs is important in preventing bacteria from invading them. It also helps them retain moisture and the original flavors they gained while cooking.

Once you decide that the ribs are leftovers, store them in the freezer or refrigerator. You should also keep them in airtight containers.

It is recommended for storing ribs prepared in advance. It involves putting the ribs in a plastic bag that is both air and water-tight.

The package is then placed in an ice-filled cooler. Ice is put over the whole package to cover it completely.

The Wozniak storage method is important because you don’t have to turn up the refrigerator’s temperature. Doing so may cause spoilage of the other foods stored there.

Ribs stored in the refrigerator can last between 3 to 5 days. Airtight containers and vacuum sealers come in handy in keeping them moisturized.

For prolonged storage, a freezer is an ideal appliance. It is capable of storing them for about six months to 1 year. Again, airtight containers are a requirement for this type of storage.

When done right, reheated ribs can be as tasty as the originally cooked ribs. Ensure to follow all the storage and reheating procedures to achieve this.

Chilling the ribs as soon as you are done feasting on them is the secret to retaining their moisture. It also helps keep bacteria away.

When reheating, be keen on which reheating methods require additional moisture and those that don’t. Through this, you’ll be serving reheated ribs whose taste and texture are as great as when they were first cooked.