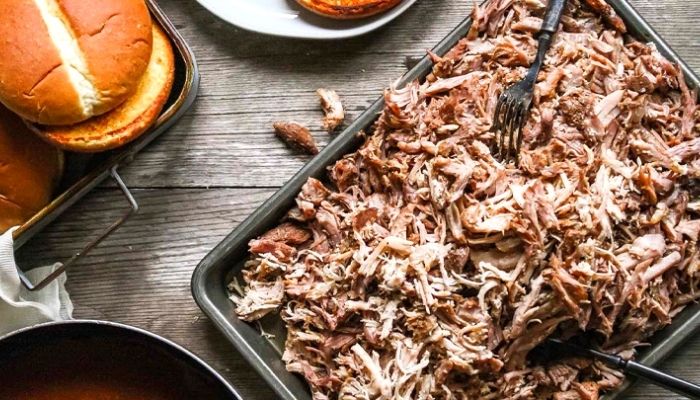 Pulled pork. The all-time American barbeque dish that sends you down a frenzy with the first bite! Served fresh and hot off the grill, it’s nothing short of a work of art. The tenderness, moisture, and juices all burst in your mouth make it an ideal meal for family and guests.

When you have enough mouths to consume all the pulled pork, that’s great! But one too many times this isn’t the case. Being that it’s a very meaty kind of steak, or perhaps having made the mistake of overcompensating with the measurements (just in case your guests work up an appetite) you may have been left with more than you expected.

And this begs the old age question, “What to do with leftover pulled pork?” Will it even be juicy enough as when it first came off the cooker? If these are questions you need answers to, stick around for some guiding details. You’ll be surprised at just how a simple hack could revolutionize reheating your pulled pork.

The Fundamentals to Reheating Pulled Pork

If you’re not already familiar with what pulled pork is, let’s bring you up to speed.  Sometimes also referred to as pork butt, it’s the upper part of the shoulder from a pig. Why the shoulder loin is preferred is because of all the fat flavors contained here. You need quite some cook time preparing pulled pork so the fatty juices make it a forgiving piece compared to a cut from just any other part. Given the name pulled pork, it comes from the way it is served which is typically as shredded pieces.

Now that that’s out of the way, back to the main agenda. Say you had too much leftover and you’re worried that the second time around won’t taste as exciting as the first. The surprising fact is it actually can. But only if you store the shredded meat correctly.  It comes down to the storage tools you use, the right temperatures, and even the tinier details of weighing the portions sizably.

Storing for Later Use

With storing pulled pork, your target should be to conserve as much moisture as possible. Unless this is maintained you will likely end up with a disappointing, dried mess. To cater to all possible situations, we’ll be looking at storage from two viewpoints. That is when grilling beforehand and when the pork is already pulled.

If you decided to prepare your pork early in advance just to have everything organized, you must keep in mind an essential aspect. And that is refrigerating the butt whole and intact. The longer it stays in one piece, the lesser the humidity loss.

Nonetheless, this will also depend on how much time you have before serving up. If the leeway is brief, perhaps 15-20 minutes, then pulling the pork butt could pass without any potential complications of drying up. So use this to make judgment calls when the need arises.

When the Pork is Already Shredded

This happens to be the most common scenario and here’s how to go about the storage process in such a case.

You will need; vacuum-sealed bags, a sealer machine, a weighing scale, a marker pen, and of course a reliable freezer or fridge equipment.

Pro-tip, before going ahead to pack the spare into the refrigerator, it’s important that you let the pork cool off first. This is to avoid offsetting the cooling temperatures of other foods in the unit which could otherwise cause them to go bad. You want to ensure that the pulled meat has dropped to at least 40 degrees Fahrenheit or lower before storing.

Once your pork butt is nice and cool, the next thing is to pull out those air-tight bags. Stick to the vacuum-sealed options as they have been tested and tried for being unassailable.  Label them accordingly with the date, weight, and type of food stored therein.

Proceed to weigh out the portions to single-serving measurements as you fill the bags. In case you’re wondering why this should even be a thing, we’ll see further ahead of the significance of it. It’s far from being just a good fridge-organizing hack as you may think. About 5 ounces is recommended per filling and half of that for children.

So now that the pulled pork has been stuffed in, ensure to push out any lingering air with the vacuum sealing machine. The bag should take to somewhat a wrinkled form confirming that the package is indeed air-free. After all your remains are wrapped up, immerse them in the fridge for later use.

According to USA Food Safety and Inspection Service, the pork can stay up to 2- 3 months in the freezer while being safe for consumption and 4 days in the fridge.

The day is here when you finally want to take the meat you stashed away and you’re hoping to warm up a delicacy! If you sailed to this point advised, you should be on the right track to achieving the same juicy outcome, perhaps even better! Here’s what to do.

Pulled pork that’s been left to sit for days or months needs ample time to defrost, 24 hours to be exact. So don’t be in any hurry to light a fire until the meat has separated enough.

As it is, there are already several ways to reheat pulled pork to perfection but here’s what we recommend after having explored many options.

Best Method to Reheat Pulled Pork without drying it Out

The secret ingredient is nothing but hot boiling water. Common to most steaks, the less overcooked they are, the more succulent they taste. And being that the pork was initially pre-cooked, there’s little room for mistakes before it loses all the leftover juices.

That said, boiling water is a great way to retain as much wetness as possible because it uses indirect heat. The procedure is as simple as;

And that’s it! You’ll plate up some tender pulled pork at just the right eating temperature. In case the portions exceeded the standard 5oz; consider adjusting the time to at least upward of 10 minutes or so.

Something worth noting is that although this process suffices, for the most part, the bark of your meat may not come out as crunchy as before. If that’s of concern to you, it’s worth supplementing the boil with a slight broil on your grill grates. But if not, then you’re good to go.

Steaming water despite being the recommended technique is not the only hack in the book. In fact, it works selectively on pork that has been previously stored in air-tight packaging. Say you skipped this part and have your pulled pork lying open in the freezer, there are a couple of ways that equally work well.

The trick with this is to use the 2 zone fire setup technique. For those with a gas grill turn on one of the burners to a high leaving the other off or on extremely low. With a charcoal grill in use, heap the coals to one side only and allow the heat to rise and diffuse. Only when the temperature reads 225°F is it safe to layer the pulled pork.

Proceed with the following steps;

If shredded, avoiding harsh contact with the fire is advisable. Accidental grease flare-ups especially are something you want to avoid. So set up a pan or cooking sheet for the broiling part just in case. Give it a few minutes and then you can serve it up.

NB: In case you aim to make a barbeque pulled pork, BBQ sauce works great as far as adding moisture goes. Use it solely without the interference of other fluids.

Pretty much the same rule of cooking to 165°F maintains regardless of whichever method you use.  With a stove pot, however, you need not add lots of liquids as they are unrivaled in retaining moisture. A little overboard and you might have more fluids than you would like, another downside altogether.

Despite being an unpopular opinion, it still makes do. The important thing to note if you go with this option is to use microwave-safe containers. The process could yield harmful chemicals if you use low-quality or unapproved sealing bags. So before setting the timer, ensure to transfer the pork cuts into a microwave-compatible dish to rule out any toxic substances in your meat.

If this sounds new, it originates from a French word meaning “under vacuum”.  It primarily relies on a hot water bath as a cooking method. Being that indirect heat is the primary source; the method applies a slow and controlled approach to food preparation. Pitmasters have confirmed that you can actually cook pulled pork on sous vide from scratch.

It does need a few supplies to get it working at optimum, for instance, an immersion circulator to keep the temperatures right. Apart from the numerous advantages the sous vide has to offer, the best part is that you need not thaw your meat for the standard 24 hours. Straight from the freezer into the hot bath, it goes. Skipping the fluid addition step is also perfectly acceptable!

The bacterial build-up is a huge concern when it comes to putting away an overabundance of pulled pork. Ideally, to steer away from this problem you must avoid the danger zone which lies between 40°F-140°F. Experts also suggest that freezing the pork right away helps cut down on bacterial infection.

In real-life situations, it’s unwise to refrigerate the meat when steaming hot as you don’t want to ruin the other foods herein. But the Wozniak method came as a savior to this problem by speeding up cooling within short durations.

Here’s how to store food using the Wozniak technique

Can I Reheat Pulled Pork More than Once?

Short answer-yes! On a side note, repeated reheating does degrade the overall taste of the pulled pork. Remember those measured portions we talked about earlier on? They come into play here. Sizeable portions ensure no remains are left and hence no waste. This translates to rich flavors compared to multiple reheats.