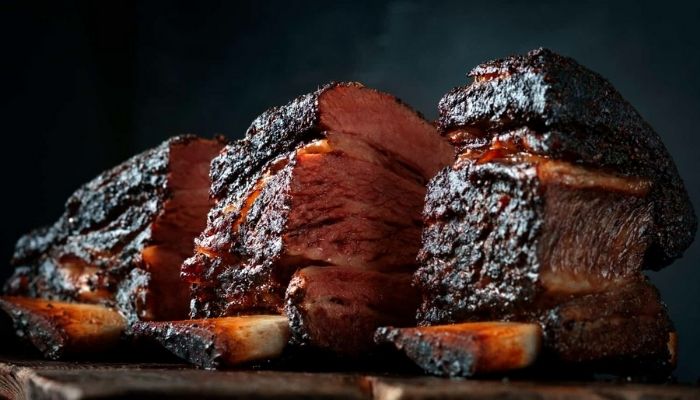 The bark on the brisket plays a crucial part in the entire extraordinary barbecue experience, which has become a favorite pastime and hobby for millions of people in the USA and worldwide.

When you take out the brisket from the smoker and present it to your guests with its perfectly dark and appetizing bark. Chances are you will make the experience and occasion even more special.

But many newbies are asking how to get good bark on the brisket, and why is it so important?

Read on to find out more about achieving the best bark and the elements of the barbecuing that affect the brisket’s bark.

The bark is the lovely and tasty crust that is formed on the exterior of the smoked meat. Unlike the common belief that it results from the caramelization of the sugar, the bark is a result of a combination of polymerization, the Milliard reaction, and a wide array of other complex chemical reactions that occur inside the smoker.

As it gets heated up and when it starts cooking, the meat begins losing moisture. As a result, the proteins on the outer surface of the meat begin bonding into polymers, which is also known as the Maillard reaction.

The pellicle which is formed will develop a beautiful spice crust on top if you have applied a suitable brisket or another spice rub.

How the bark depends on the rub

The rub which you use for the brisket or other meat is essential for the development of a tasty and impressive bark. The reason is that the ingredients in the rub, like sugar and salt, which are water, will dissolve from the moisture from the meat and from spritzing during the cooking and will be infused into the meat, and other ingredients which are fat-soluble will dissolve when the fat in and on the meat begins rendering, creating a glaze.

The glaze on the meat is formed by all those dissolved and undissolved ingredients in the rub will first have a pasty form but will then start drying from the heat and will start developing a crust.

This is why, if you want your smoked brisket to end up with a mouthwatering and gorgeous bark, you should make sure to cover it entirely with the suitable rub. In case some of the spices fall off or the rub layer becomes thin during the smoking, you should add more during the process.

As for the best rub for creating the perfect brisket bark – there are many options, which you can choose from. If you are a beginner, you may want to start with a ready-made barbecue rub to ensure that your meat forms a bark.

As mentioned previously, you can opt for a commercially available rub, such as our top-recommended Plowboys Yardbird Rub, when preparing your brisket for smoking.

You can also create your own homemade rub or choose any other rub which contains the important basic ingredients, including salt, sugar, pepper, and paprika. Other common ingredients include garlic and onion powder.

Keep in mind that the different spices and ingredients in the rub will affect the thickness of the crust on the meat.

The best way to achieve that perfect spice crust and flavor of the brisket is to start with the basics and then experiment and add ingredients according to your personal taste.

Other key factors in achieving a good bark

Here are the other key factors which will help you achieve not only a good looking but also a deliciously tasting bark on your smoked brisket:

Apart from the rub, the smoke is another key factor for the formation of a beautiful and tasty bark on the smoked meat.

The longer you expose the meat to the thin blue smoke, the darker the bark on its surface will be.

Even though a brisket that has been smoked for 12 or more hours may look burnt, when prepared properly, this dark crust on the exterior will only make it an even more delicious and appreciated piece of meat.

The reason is that the particles of the smoke will adhere to the glaze from the dissolving rub, making it appear darker and more appealing.

Even if you are new to barbecuing, you probably know that temperature control is key for achieving the best results, including preparing a brisket with a gorgeous and mouthwatering bark.

In the middle of the smoking session, the moisture from the meat you cook will evaporate. This will cause the slowing down of the cooking due to the cooling of the meat. But once the moisture has evaporated, the surface and rub will dry out, and thus the development of the pellicle will begin as a result of the Maillard reaction.

The temperature needs to be high enough but not too high in order for this chemical reaction to occur and the bark to start forming.

The content of fat in the meat is another essential element for the formation of the bark. The reason is that when the fat begins rendering and dissolving the fat-soluble ingredients of the rub, the glaze and the spice crust on the surface of the pellicle start forming.

Keep in mind that too much fat can stop the development of the pellicle, so it is always advisable to trim any excess fat from the meat and leave only enough needed for the rendering and the formation of the glaze and bark.

Adding moisture by spritzing the meat while it is cooking can also help the creation of an impressive bark.

You can ensure that your meat is covered with enough moisture by applying different liquids of your choice during the cooking. You can use apple cider vinegar, balsamic vinegar, Worcestershire sauce, mustard, or any other preferred savory juice to the surface of the meat with the help of a spritz bottle.

You should avoid ingredients and components which contain a lot of sugar because this can cause the burning of the sugars by the high temperatures.

By spritzing the meat, you can apply it evenly and avoid washing off the dry rub from the surface. In fact, the moisture will help the ingredients of your rub to adhere better to the surface of the meat you are cooking.

Plus, the moisture will help the meat absorb more of the smoky flavor from the smoke.

But keep in mind that overdoing it with the spritzing and basting can cause excessive moisture to prevent the starting of the Maillard reaction and thus the formation of the bark.

Also, avoid spritzing the meat during the first couple of hours of cooking to prevent washing off the rub.

Here are some tips which will help ensure that your brisket comes out of the smoker with jaw-dropping and flavorsome bark:

If you want to prepare your own homemade rub for the perfect brisket bark, here is our favorite recipe:

If this recipe is too complicated for you, you can opt for a basic Texas-style brisket rub which consists of salt and pepper instead.

Rub recipe for great bark on a pork butt

You are preparing Boston Butt and want to ensure that it has beautiful bark, then you can try out the following recipe:

Hopefully, we have helped you understand how the bark on the brisket or other meat is formed and what the ways to ensure that you achieve it when smoking the brisket are.

Once you master the art of smoking meat with impeccable bark, you can be pretty sure that your guests will keep coming back and that your reputation as a talented pitmaster will grow immensely.