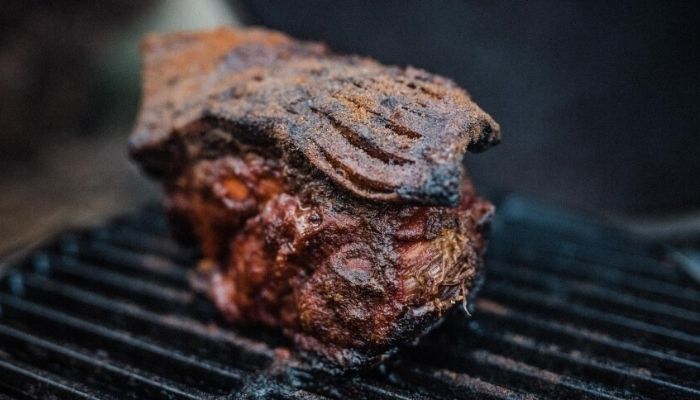 Since pork shoulder is a relatively tough cut, the best way to prepare it is to embrace the low and slow cooking method. The more prolonged smoking at lower temperatures will ensure that the connective tissue and the fat are rendered properly.

If your recipe calls for cooking the meat at a higher temperature, you can follow our guide to find out how long to smoke pork shoulder at 275 degrees Fahrenheit. This is a suitable temperature for cooking the pork over indirect heat on the grill or in the oven.

The goal is to smoke the meat until it reaches an internal temperature of 180 to 190 degrees Fahrenheit.

Pork shoulder is a primal pork cut that comes from the hog’s shoulder and upper back area. It is separated into two main parts – the Boston butt and the picnic. Officially, you can expect to find one or more of the five main pork shoulder subprimal cuts in your local store, which include the shoulder blade, the picnic shoulder, the jowl, the hock, and the foot.

Since pork shoulder is a cut that is rich in fat, you can also often find it in the form of ground meat for making sausages or as burger patties.

This cut is also an excellent choice for those of you looking to prepare pulled BBQ pork.

The pork shoulder is a part of the animal which includes muscles that are heavily used during the lifetime of the hog. This means that both the butt and the picnic can be tougher than some of the other pork cuts, and as such, is best prepared using slow cooking at lower temperatures for long hours. It is a favorite cut of meat for many pitmasters, home BBQ enthusiasts, and consumers alike due to its rich flavor, mainly due to the rich blood flow that the muscles in this area get. This is especially true if you choose to buy and prepare fresh pork shoulder from well-raised pork.

Unlike regular pork roast, the meat will stay juicy and moist even after hours of low and slow cooking, thanks to the thick layer of fat located under the pork shoulder’s skin. So, make sure you pick pork meat from the shoulder area, which still has the skin, and preferably the bone attached if you want the best results when making homemade smoked pulled pork, and plan on cooking it at 275 degrees Fahrenheit.

If you cook the meat from this part of the hog at higher temperatures, there is a risk that you end up with a tough and unpleasant tasting piece of meat.

Most pitmasters will recommend that you smoke the pork shoulder at a temperature of 225 degrees Fahrenheit. You can expect the meat to cook for about two hours per pound at such a low temperature.

Some BBQ masters will go even lower when preparing pork shoulder and will cook it at temperatures as low as 180 to 200 degrees Fahrenheit. This though prolongs the cooking process, which can go on for up to 24 hours when preparing a pork butt weighing 8 to 10 lbs.

If you are a newbie, keep in mind that the temperature in your smoker can be affected by several different factors, including the ambient temperatures outdoors and the weather. When cooking in colder weather, it can be hard to maintain the smoker’s temperature consistent, so you should aim for a temperature that is a little higher than 185 degrees Fahrenheit.

How Long To Smoke Pork Shoulder At 275

If you prefer to crank up the temperature and cook the meat at a higher temperature of 275 to 300 degrees Fahrenheit, you can speed up the cooking process and complete it for 10 hours or even less. But the resulting consistency may not be as perfect as it would be if you have the patience and time to smoke the pork shoulder at lower temperatures and for longer hours.

As we mentioned, you can expect the meat to take about 80-90 minutes per pound to cook at a temperature of 275 degrees Fahrenheit. This means that if your pork shoulder weighs 10 lbs. you will need to cook it for approximately 15 hours at 275 degrees.

While this is a long time, if you set the smoker at a lower temperature of 225 degrees or less, then you can be out cooking the same pork shoulder for 20 to 24 hours.

For results with a softer bite, you can leave the meat in the smoker or grill until its internal temperature reaches 203 degrees Fahrenheit. It will not be overcooked and can be even easier to shred when making pulled pork.

Unfortunately, you should expect the internal meat temperature to stop rising once it reaches about 150 degrees Fahrenheit when smoking a pork shoulder. This is the dreaded barbecue stall that occurs during the evaporative cooling, which happens once the meat starts evaporating its natural moisture due to the hot temperatures.

This process can go on for hours, and even though it is completely normal, it can be especially frustrating for beginners.

While there is little you can do to avoid the BBQ stall altogether, pitmasters use some methods to shorten the process, one of which is the Texas crunch.

The Texas crunch method can help shorten the stall and includes removing the meat from the grill or smoker when its internal temperature starts stalling and hovering between 150 to 170 degrees Fahrenheit. Once the meat is out, you should wrap it with aluminum foil tightly and put it back in. the foil will help trap the moisture which is being evaporated, but some pitmasters avoid using it because the foil can prevent the meat from being infused with the desired smokiness and flavor as well as prevent the development of a beautiful and crunchy dark brown bark.

Some use butcher paper instead of foil. The problem is that it is too porous, and as such is not as efficient as shortening the time of the barbecue stall when cooking pork shoulder.

The best advice is to let the stall pass naturally and let the meat cook without intervening for as long as it takes. If you don’t have the time or patience and want to beat the stall, you can also feel free to use the Texas crunch method.

Another dreaded BBQ moment is when the meat reaches the desired doneness and internal temperature earlier than intended. The easiest way to get out of this situation is to shred and serve the meat immediately after resting it.

But since this is not always possible, and your guests may be coming in a few hours, you can use the faux Cambro technique to ensure that the pork shoulder remains juicy, delicious, and warm until it is time to serve it.

Cambro is the brand name of the professional equipment used by caterers to keep the food hot or cold and delicious for hours while it is being transported from point A to point B.

But fortunately, you don’t need to buy such expensive equipment to get similar results when you need to keep your pork shoulder warm and juicy for one or more hours before serving it.

You can use a good quality cooler instead. Just pour some hot water into your hard-sided cooler and close its lid, letting it sit for about 30 minutes. After that, pour or drain the water out of the heated insulated cooler and line the bottom with an old but clean dish towel. Wrap the pork shoulder in aluminum foil once it has reached the desired internal temperature and place it over the towel in the cooler.

When the faux Cambro method is done properly, you can expect the meat to remain hot and juicy for up to 3-4 hours.

Leaving it in for longer will cause its texture and flavor to start deteriorating.

Some BBQ enthusiasts, especially newbies, are tempted to serve the pork shoulder as soon as it is done. But you will need to have a little more patience and let the meat rest if you want it to be even more delicious, juicy, and tender.

If you are serving the meat after more than an hour, then use the abovementioned faux Cambro method to rest the meat.

If not, wrap the cooked pork shoulder in aluminum foil and let it rest at room temperature for an hour prior to cutting or shredding it. Resting it will allow the juices to distribute themselves within the meat instead of running out while cutting the pork.

This will ensure that it is succulent, flavorsome, and perfectly tender when it is time to cut and serve the pulled pork.

While 275 degrees Fahrenheit is not the best temperature for low and slow smoking of pork shoulder, it is an acceptable temperature to choose if you don’t have the time and patience to wait for up to 24 hours for cooking it. The results will still be excellent, and you can expect the pork cut to be cooked and be juicy, tender, and delicious after cooking it at a temperature of 275 degrees for about 10 hours instead.