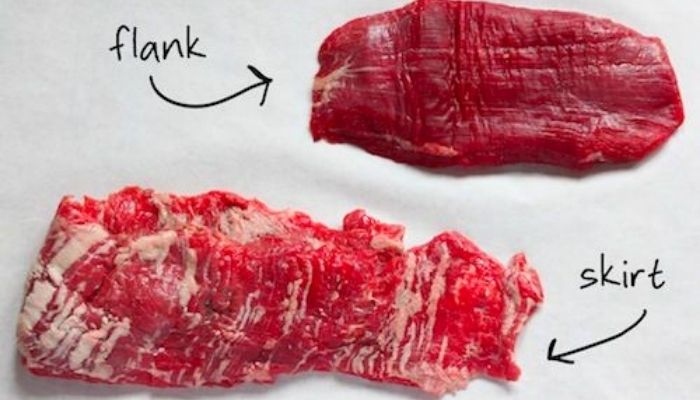 Skirt steak and Flank steak are both tough strips of meat that make great meals when grilled or seared. People often mistake one for the other and often use these names interchangeably.

Their main difference is the degree of their toughness. Flank steak is less tough than skirt steak. On the other hand, skirt steak has flavors with higher intensity. It tastes better when seared or prepared to medium-rare or rare. Flank steak is more tender and recommended for a well-done steak meal.

What Type of Cut is Flank Steak?

This steak is cut from a cow’s abdominal part. The movement of the muscles is strong in this area, making the fibers tough and the meat lean. Flank steak has a bigger width and more thickness than skirt steak.

Cutting the meat against its grain is an important skill to master because it reduces the extremes of its texture.

This steak is endowed with numerous flavors. When marinated, it gets softer and more tender, making a savory soft steak that is gentle to chew.

Using high heat levels is another way to achieve such friendly textures from flank steak. Besides searing and grilling, reverse searing is also a recommendable way of preparing it.

The meat is packaged as a whole muscle and mainly sold in packages measuring about 2 pounds each.

Types of Recipes for Flank Steak

There are different methods you can use to prepare this seemingly tough and stubborn chunk of meat to turn it into a tender and mouth-watering dish.

Using honey and soy in its preparation is at the top of this recipe list. Another method of flavor addition that can be followed to make the steak better is this marination recipe.

Bulgogi flank steak and a combination of butter, garlic, and lemon are the two other top-notch recipes that are followed by many to improve the quality and flavors of flank steak – making it worth a second and third serving.

What Type of Meat is Skirt Steak?

This type of meat is sliced from a cow’s diaphragm. This is a near distance from the flank steak’s source, the animal’s abdomen.

Its most distinct characters are the long strips, leanness, and toughness. It is not so distinguishable from the flank steak. This explains why it’s easy to get mixed up about the two.

You must have heard the mention of ‘outside steak’ and ‘inside steak’, time and again. This should not confuse you since there is not much big difference between them.

Inside cuts are derived from the cow’s interior sides of the rib on the lower ends. Outside cuts, on the other hand, are taken from its chest wall on the outer part. The main sections providing it are the ones located on the 12th and 6th ribs. The meat is covered by a thick membrane, the diaphragm.

Compared to inside skirts, the outside ones are thicker but have a more regular shape. Their counterparts are thinner and exhibit shrinkage when exposed to heat during cooking. This results from the contraction of muscle fibers as they tighten under high temperatures.

Outside skirt steaks are more popular in restaurants because of their compact and regular shape. It makes them more presentable on a plate, as compared to inside steaks whose shape lacks uniformity.

A general characteristic exhibited by skirt steak is its high fiber toughness contributed to by the high movement of the cow’s muscles in the parts where the meat is cut from.

This contributes to the high intensity of flavors and texture. It is also the reason why cooks and BBQ pitmasters suggest that it be prepared medium-rare or rare. Well done skirt steaks are inedible due to the increased toughness.

When grilled or seared, this steak results in finger-licking stir fry or fajitas. Cutting it against its grain boosts its effectiveness and tears the tough fibers apart, making it more chewable.

You can use as many different recipes and tenderizing ingredients as possible. There is no limit.

The Importance of Cutting Steak Against the Grain

Beef steaks can be tough and chewy, especially if derived from areas with massive muscle movements.

Cutting the meat against the grains breaks and separates the fibers that are closely knit together. It makes the steak easy to chew and swallow and also prevents choking on it.

Thin slices of meat that’s cut against the grain are easy to cook and the heat gets to reach the meat’s center.

The tough texture of these two types of steaks makes it hard to prepare them using other methods apart from grilling and searing. It’s also important to note that they are more edible when prepared to rare or medium-rare, as full doneness would toughen them further.

Modes of preparation that involve indirect grilling rarely work during the making of skirt and flank steak due to their difficulty in penetration.

Direct grilling offers more heat and its chances of reaching the inner flesh of the steaks is guaranteed.

Once the grill marks start showing on the sides of the darkened meat, consider it ready or nearing readiness.

After grilling, flank steak doesn’t compress as much as skirt steak. The latter is left thinner and leaner.

The right internal temperature for the meat after preparation should be 130° F. To record this accurately, use a digital thermometer.

How to Differentiate Between Flank and Skirt Steak

Several factors can guide you in distinguishing between flank and skirt steak. The two have characteristics with close similarities so it is easy to get mixed up. Here are the main differences:

Flank steak is more priced than skirt steaks. Judging from its characteristics, however, you can see that the cost is justifiable. On the other hand, skirt steak gives you a chance to experience flavors that are deep and rich.