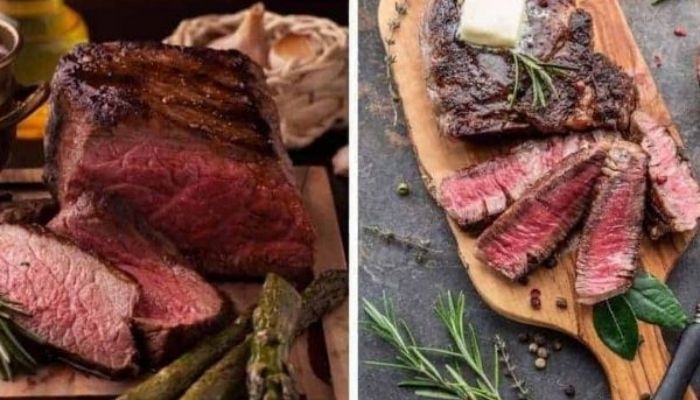 Talking about the most delicious steaks available, both the ribeye and fillet mignon cannot go unmentioned. The ribeye deserves a spot due to its out-of-this-world flavor whereas the fillet mignon is well known for its superb tenderness.

Over the years, pitmasters and those who love barbeque have often disagreed on which, between the two, is the better choice. Some swear that the ribeye is the best steak they have ever had while others insist that the fillet mignon is superior.

Well, both steaks hold their own when it comes to what they have to offer, but which one is a better choice? In this piece, we shall analyze the two steaks head-to-head and settle this matter once and for all.

About the Fillet Mignon

The name of this steak is borrowed from the French language whereby fillet stands for thread, while mignon stands for small and pretty. The cut, which is long and slender, is from the muscle psoas major, a muscle that lies inside both sides of the ribcage, close to the spine. The muscle is neither weight-bearing nor used much by an animal, as such it is quite tender. This translates to even when cooked where it can be cut by a fork and  ‘melts in your mouth’ when chewing.

The steak is also lean and quite low on fat, with only around 2.5 grams of saturated fat. Due to this, those who watch their weight but still want to indulge in some nice steak, consider it ideal.

You can only obtain a small amount of fillet from each animal which makes this steak among the rarest and the most expensive.

More About the Ribeye Steak

This steak has a reputation of being tender, juicy, flavorful, and with just the right amount of fat. It comes from the longissimus dorsi, a muscle that runs between the loin and the shoulder of an animal. This muscle is quite tender as it is not exercised much by an animal. To add on, it contains some fat deposits better known as marbling. This adds flavor and moisture to the steak when cooked.

The ribeye steak can either be boneless or bone-in (rib-steak). The latter means that the steak contains a piece of rib bone which in some cases may protrude by a few inches. This can be cut off so that the bone lays flush with the meat. If you want even more flavor and moisture to your steak, the bone will come in handy.

On the fat content, 3.5 ounces of ribeye steak contains around 22 grams of saturated fat per serving. It is, therefore, not a suitable cut if you want to maintain or lose some weight. Regardless, you can have it once in a while as its taste and the experience make it worth your while.

Also, check our detailed comparison between Ribeye Steak and Sirloin and find out which one comes on top.

Ribeye steak vs Filet Mignon – Which is the better one?

Now back to our original question on which is better between the two. To make an informed decision, we will compare both steaks on factors that are most important to barbeque lovers. These include flavor and appearance, cost, and cooking methods.

In appearance, a fillet mignon steak is considerably smaller and leaner than a ribeye steak. Its fat levels are quite low and run through the meat in delicate thin lines. The steak is very tender.

On the other hand, a ribeye steak is bigger, thick, and has generous amounts of fat content. As mentioned above, the ribeye is also tender but not as much as a fillet mignon. It is considered to be tougher but this is compensated by its flavor and juiciness. The cut tastes much better than the fillet mignon. You will delight in feasting on a ribeye steak but only if you are a fan of greasy steaks and are not bothered by its high-fat content.

To lay your hands on either of the steaks you will have to dig deeper into your pockets, more so with the fillet mignon. Due to its rareness and extra-ordinary tenderness, the steak is usually in very high demand which drives its price even higher.

You can, however, save some bucks by purchasing it from a meat supplier or butchery and cooking it at home rather than eating from a restaurant.

The same case applies to the ribeye steak. To save even more money, you can buy a larger rib section and cut it into ribeye steaks yourself, then prepare it at home.

The filet Mignon is best cooked to a medium-rare so as not to lose its tenderness. On its taste, it tends to be a bit flat and not as enticing as that of ribeye. Hence, you may need to marinate, smoke wrap in bacon, or season it with a rub. You can then cook it by grilling, boiling, roasting, or pan-frying.

To avoid overcooking the steak, medium heat is first applied, to sear it on both sides, then the steak is moved to lower heat to finish cooking it to a medium-rare. Using high heat or cooking it for long may lead to it losing its tenderness and drying out.

Once it is ready, you can further boost its flavor by serving it with compound butter, Bordelaise sauce, or even the left-over pan juices.

The ribeye is best cooked over high heat on a grill or broiler. This allows it to form a flavor-packed brown crust on the outside and a juicy, tender interior. However, to achieve this you need to be experienced in grilling as the steak can quickly dry out due to the high heat from the grill. Grill tongs will help protect your hands from any flames, improving your enjoyment of this cooking method.

For lesser experienced cooks, pan-searing, with some butter, on an iron skillet is recommendable. This method allows the steak to cook slowly and the meat gets tender and well-cooked naturally. For the ribeye, seasoning or serving the steak with sauce is not necessary as its taste speaks for itself.

Having prepared and feasted on both types of steaks, ribeye is our favorite pick – though the fillet mignon comes at a close second. Ribeye’s savor blows our taste buds away, every time. Besides, for most people, having barbeque is a once in a while affair and they expect that when they do it will be phenomenal. With its exceptional taste, the ribeye never disappoints!

However, as mentioned above the fillet Mignon comes at a close second especially because it a healthier option. The best steak for you will, therefore, depend on your preference and interests.

Why not try out both steaks and leave us a comment on which one you prefer more.