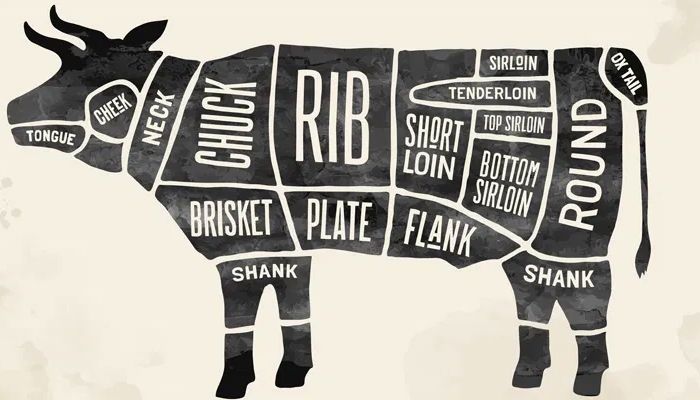 Whether you are dreaming of becoming a pitmaster or butcher or are making your first steps in the enthralling culinary world and love eating beef, it is important to know where your meat comes from.

Knowing the different cuts of beef will help you become more knowledgeable about the origin of each type of beef cut and will help you prepare each beef cut in the best possible way.

Read on to find out more about the different cuts of beef, which part of the steer’s body they come from, and how to cook each of them for the best results.

The different beef cuts were not specifically named in the USA until WWII when they became standardized and named by the US government.

Today, the USDA recognizes 8 primal regions or cuts of the cow, including:

These primal cuts are then further down broken into subprimals and then into the portion cuts, which are available in stores.

Here are the 8 primal cuts of beef and the subprimal and portions they are broken down into:

The primal beef chuck is a cut of the shoulder and neck of the steer, and it typically contains a lot of muscles, fat, sinews, and connective tissue.

The beef chuck subprimal and portions are very flavorful due to the tissues they contain. They can also be tougher than many of the other cuts, which means that they require a longer cooking time for tenderizing the meat.

Because of this, the chuck cuts of beef are usually less expensive than the other cuts. But they are still delicious if prepared properly.

Chuck cuts and portions are typically used for pot roasts or stews, as well as for ground meat for burgers. The burgers made of ground chuck cuts are delicious, thanks to the sinew and fat they contain.

Chuck eye steaks are the budget-friendly alternative to ribeye steaks, and when prepared properly, can be as flavorsome as the much more expensive ribeye steaks.

The beef rib is one of the most tender parts of the cow’s body and typically has marbled fat through the flesh, which makes it the source of some of the most expensive beef cuts.

Because the beef rib meat is tender and marbled, it is easy to prepare with dry cooking, and the results are excellent when making roast and steaks from the rib cut.

The meat from this part of the cow is popular for making delicate gourmet dishes requiring minimal cooking, again thanks to the natural tenderness and the beautiful fat marbling of the meat around the animal’s breasts.

The primal rib cut starts from the 5th and continues to the 12th rib of the animal and includes the lengthy muscle which runs along the spine, along with the ribs.

This is the cut that produces some of the best-known and expensive cuts, including spare ribs, back ribs, ribeye, and prime rib roast.

The beef plate, also known as a short plate or long plate, is a cut from the area below the rib. This meat is usually well marbled and has a rich flavor. On the other hand, the beef plate cuts can be tougher than others, so they can be more difficult to prepare.

Some of the more popular cuts which come from this short plate cut include the Philadelphia steak, skirt steak, and short ribs.

The skirt steak cuts are the best option to use when preparing fajitas. The short plate is commonly used for making ground beef due to its good fat content.

When it is properly prepared through braising and is combined with smoky and rich flavors, the short plate is delicious meat to have, especially on the cold nights during the winter.

Have you ever heard of Picahna steak? This a an underrated cut of beef which is famous in South Brasil.

If you have heard of low and slow, then you have heard about the brisket cut. It is the part that is located below the beef chuck and consists of the meat located around the breastbone of the animal.

It is among the tastiest parts of a steer but is very tough and needs to be prepared correctly, by first braising or smoking it, and then cooking it at low temperatures and for long hours if you want it to be succulent and juicy.

The brisket is also an excellent cut to use when making smoked pastrami.

Since it is harder and slower to prepare and cook and is tougher than other cuts, brisket is usually one of the cheapest beef cuts.

If you have the time and the means and skills to prepare it properly, though, it can be one of the most delicious cuts.

The beef shank is among the toughest cuts from the steer’s meat. It consists of the muscle located at the top of the legs of the animal, which are usually quite strong and well developed.

When it has been braised, the shank can be turned into a classic Osso Bucco, but this cut is suitable for making stews and soups.

While it is normally cheaper than other cuts, at times when Osso Bucco comes into fashion, the beef shank cuts can become quite expensive as well.

The beef loin comes from the hindquarter cuts and is among the most expensive cuts of meat, challenging the rib cuts.

This cut consists of very tender meat, as the muscles of the steer are not as worked and used.

Some of the popular cuts which come from the beef loin primal cut include the New York strip, the tenderloin, the T-Bone, porterhouse, and the strip steak.

The cuts from the sirloin area are usually tougher than the cuts from the tenderloin and short loin due to the content of more muscles located near the animal’s hind legs.

But like with the other tougher beef cuts, the cuts from the sirloin can be absolutely delicious and tender when prepped and cooked correctly.

The beef round primal cut is from the rear part of the animal and consists of large muscles, which make the meat tougher and more challenging to cook.

The best way to prepare cuts from the round beef cut is through slow cooking, making ground beef, reverse searing, or use it for preparing stews.

The meat from the beef round cut is as tough as that coming from the chuck cut but doesn’t contain as much collagen and is not as succulent or flavorful as the beef chuck.

Some of the common cuts from the beef round include bottom round roasts, top round steaks, tip roasts, tip steak, and eye of the round.

In general, the cuts from the beef round primal cut are cheaper than most other cuts, which makes them perfect for people looking to save money, especially for stews or ground beef.

The beef flank consists of a small area of the animal’s body located under the loin.

It is flavorful but can be tough due to the long muscle fibers it contains. But if it is prepared by cutting the meat across the grain and is not overcooked, the beef flank cut can be very tasty meat.

Another tip for tenderizing the flank is to marinate it and cook it at a high temperature quickly.

You can also braise the flank or use it in the form of ground beef.

Find out the 4 BIG differences between flank steak and skirt steak and which of them is the best!

What to look for when buying beef

When you are shopping for meat, you should look for the following features if you want to ensure that your hard-earned money is well spent and that you are getting a fresh, delicious, and most importantly a safe cut or portion of meat to prepare and eat:

Why are the prices for different beef cuts so different?

In general, you can expect that the cuts which are more tender and require less time for preparation and cooking to be more expensive than the tougher cuts.

The tender cuts are usually from the middle region of the animal, where the muscles have not worked so hard.

The tougher parts come from the legs and rump, where the muscles work harder.

But keep in mind that if a cut or dish suddenly comes into fashion, even the traditionally cheaper cuts can be sold at high prices. For example, with more people becoming interested in low and slow smoking and barbecuing, the prices of the tougher cuts like the brisket or ribs have been growing.

The leaner cuts have become more expensive as well, due to the fact that more people are looking for healthier foods with minimal fat.

Check which are the most expensive cuts of beef

What are the leanest beef cuts for cooking?

Traditionally, fat and beautiful marbling has been preferred cuts, due to their juiciness and amazing succulent taste.

But with more people looking for healthier food options with lesser fat, the leaner beef cuts are becoming increasingly popular too.

The leanest beef cuts are usually found in the flank or round cuts from the hindquarters of the animal.

Tenderloin is both lean and tender, which makes it a highly prized and expensive beef cut.

While learning and recognizing the many different beef cuts can be confusing, finding out more about the 8 primal cuts and their unique individual characteristics can help you make better decisions when shopping for a particular meal or occasion. It can also help you choose recipes and use food prep and cooking methods that are the most suitable for the cuts so that you can get the best out of each beef cut you buy.