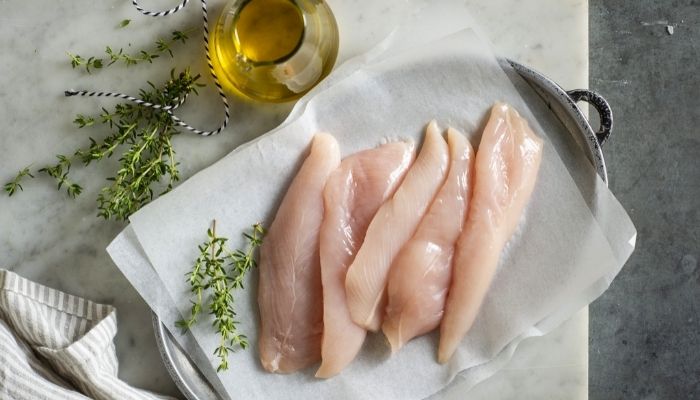 What is chicken tenderloin, you ask? Well, it’s the misconception of where we think this cut originates from. It turns out that part of its name comes from the French word “tendre” which means “to touch lightly.” This refers to how chefs should cook this component.

What is chicken tenderloin, exactly?

Maybe you have seen the ingredient included in menus even if you didn’t know what it exactly was. Some of you may have ordered before or wondered why they are classified as such when most people associate them with breast meat rather than loins – but there might be an explanation after all!

What is chicken breast?

Chicken breast is a cut of meat from the underside and corresponding to one side of the animal’s chest. The word “breast” usually connotes that this particular piece has little or no bone, unlike other portions.

The chicken breast is composed mainly of muscle with attached fat. This confers some flavor on it but also makes it much more tender than other pieces like thighs or drumsticks.

It might be stuffed into pâtés to make breasts de volaille, breaded for fried dishes (chicken parmesan), boiled in stews or braised whole; prepared à la crème along with vegetables.

In the supermarkets, some employees will just slash breasts into long strips and sell them as “tenderloins.” So what does this mean for you? If you’re looking for juicy meat that isn’t dry, then make sure your grocer has real tenderloins by checking out the main characteristics.

White meat is often the most tender type of poultry out there, but when it comes to chicken breast vs. tenderloin you may notice a subtle difference in taste and texture that can make all the culinary difference for your dish. The answer isn’t straightforward – although these two muscles are located on opposite sides of one another, they both contain white muscle tissue with similar levels of fat content as well as other important nutrients like protein or vitamin B12.

How to tell the difference

The tenderloin is a more difficult cut of meat to mimic and can be identified by its smaller size as well as the lack of plumpness in comparison with that of breasts. Tenderloins have more narrow widths than traditional pieces of chicken breasts. They are also typically darker than breast meats due to their distinctive peachy hue which should make them easier for customers at supermarkets to recognize!

Chicken breast is a lean, low-calorie protein food. It’s an excellent source of high-quality protein and provides significant levels of six essential amino acids that are not made by the human body but must be obtained through diet or supplements.

Chicken tenderloin is a low-calorie nutritional powerhouse. By weight, it has more protein than any other cut of chicken meat and can be up to three times as lean! It also provides significant levels of six essential amino acids that are not made by the human body but must be obtained through diet or supplements.

Specialty cuts like this one provide an excellent opportunity for restaurants looking to offer something different from traditional menu items. A dish that pairs these two proteins will give diners a contrasting experience in texture and flavor without sacrificing the nutrition benefits!

How to separate the tenderloin from the breast

The tenderloin is found on the underside of a chicken breast, and in order to prepare it, you must first remove the breasts. The best way to do this is by cutting along each side of the keel bone with a sharp knife or poultry shears until it’s fully removed from both sides. Once these bones are cut away, reach under the skin at either end of one breast and gently take hold. Slide your hand all around as close to where that meat meets cartilage for as long as possible before finally pulling outwards towards yourself. Repeat on the other side if needed. From there just slice off any remaining fat pieces you can see underneath the exterior layer of muscle tissue and enjoy!

Can chicken breast be a substitute for tenderloin?

You may be wondering how to differentiate between chicken breast and tenderloin. With our handy tips, there’s nothing stopping you from switching them with ease! Chicken breasts are a little bit meatier and have thicker skin while tenderloins are super leaner but also have thin skin (a lot of people don’t know this!). The good news? You can use both interchangeably if you follow these advices:

The tenderloin will take less time to marinate, so be sure not to overdo it on the flavor with this cut. Marinating for a longer time can also result in an unpleasantly mushy texture.

Chicken tenderloins are a great option for quick and easy weeknight dinners. You can cook them in less than 10 minutes on each side, with no need to use the time-consuming meat thermometer! The best way to tell if they’re done is by making a small slash partway through the chicken – once it’s opaque all throughout, you know your meal is ready.

You can use breast instead of chicken tenderloin for a specific recipe. In order to do that, you’ll have to flatten pieces with a meat tenderizer. After slicing the breast into strips, put the meat between two sheets of wax paper. Use your mallet or rolling pin and pound them down until they are flat – this will make it easier to fry in oil later on without having any big chunks that won’t cook through evenly when fried up with other ingredients like vegetables. Now remove one sheet from underneath so only half is still being held by either hand- if there’s too much weight pressing against both hands then just grab an edge now and fold over onto itself (a little at first) while continuing to smash gently.

First of all, don’t use too many seasonings!

If you do so, there is a huge risk of ruining the taste of your meal.

To keep the best of the chicken tenderloins taste you’ll just have to prepare a light marinade. Just mix lemon juice with black pepper, salt, and olive oil.

After that stick to healthy ways of cooking the meat, like baking in parchment paper, grilling, or steaming.

What goes great with chicken breast or tenderloin?

Chicken breast has a very mild taste and can be combined with many different types of sauces.

It’s perfect for sandwiches, salads, or even as an appetizer on its own! Actually, the only downside is that it takes longer to prepare than tenderloin.

Tenderloins have a stronger flavor so they are usually prepared in combination with other strongly flavored ingredients like mushrooms or tomatoes. It also doesn’t require much time after cooking – you just need to heat up some oil at medium-high temperature and put the meat in there until cooked through (about 15 minutes).

There are also some side dishes, which are perfect for both – chicken breast and chicken tenderloin:

There are many ways to cook chicken. Some people prefer the tenderloin muscle, while others go for breast meat. However, once you’ve made your decision and understand how it will change the cooking time or texture of your dish, then you can be sure that whatever type of chicken is used in a recipe – whether breast or tenderloin – the end result will still taste delicious.

We hope this article was helpful in answering the question, “What is chicken tenderloin?” If you have any further questions let us know in the comments section below.