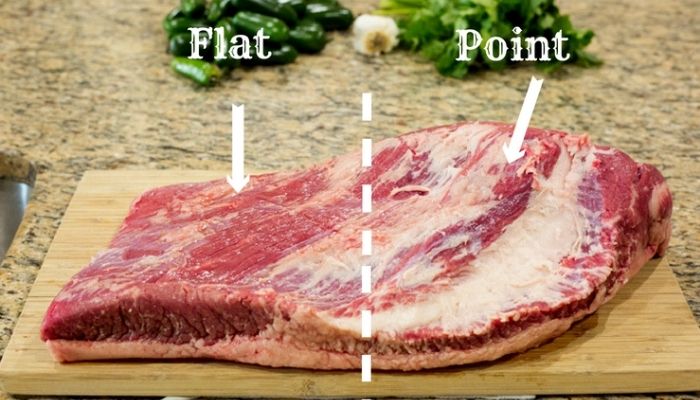 Low and slow-smoked brisket is among the favorite dishes both in restaurants and for backyard pitmasters. It is a meat cut which is often the winning accent in prestigious barbecue competitions too.

The only problem for many home cooks is the time, effort, and skills it requires to be prepared to perfection. The main reason why this is among the most labor-intensive meat cuts to cook is that it is very large and has a specific structure.

The good news is that you can still prepare brisket at home by choosing one of its two main parts – the point or the flat. This will reduce the size and weight of the meat from about 10-18 lbs. to a more manageable one that will fit in most smokers, cookers, and grills.

The question is – how to choose between the two, and what are the pros and cons in the brisket point vs. flat standoff.

Read on if you want to learn more about these two parts of the brisket, what each of them is suitable for, how to prepare them best, and more.

While the brisket used to be considered an inexpensive meat cut, today it has gained huge popularity and is being offered in the highest premium Prime and Wagyu categories as well.

It is believed that the person responsible for making the brisket so popular and famous is pitmaster Aaron Franklin from the Texas-based Franklin Barbecue, who won the Best Chef in the Southwest James Beard award in 2015.

The beef brisket is a primal cut including one of the two pectoral muscles in the chest area between the forelegs of the steer. It is a large and tough cut, mainly due to the fact that it is made of two muscles that work very hard throughout the lifetime of the animal. The brisket has little marbling and consists of two distinct muscles. One is the pectoralis profundus, referred to as the flat, and the other is the pectoralis superficialis, commonly known as the point.

The flat is a rectangular, long, flat, and lean muscle covered with a layer of fat, and the point is oval-shaped, narrower, fattier, and thicker than the flat.

Each cow has two briskets, and these cuts usually weigh 10 to 18 lbs. each.

While it is a much-loved dish, few home cooks dare to tackle a whole beef brisket. The main reason is the sheer size of the cut, as well as its toughness and the time and experience it takes to be smoked and prepared properly.

The problem is that it is very easy to mess up the brisket and turn it into a very tough and unpleasant piece of meat if it is not prepared correctly and cooked low and slow. The long cooking time helps break down the tough connective tissues and to render the fat of the brisket muscles.

Fortunately, the brisket is more often offered cut into two halves – the point and the flat, and as such is more accessible by home cooks and newbie BBQ fans.

Each of these two parts of the brisket is rich in collagen-based connective tissue, with less marbling than other cuts. The structure and texture of these brisket cuts make it necessary for the meat to be cooked at low temperatures for a long time for the best results.

The flat is the larger part of the brisket and has a fat layer on top, making it suitable for slicing, for preparing corned beef, and others.

The thicker point is the smaller portion of the brisket and has more marbling and connective tissue, which makes it juicier and suitable for making burgers and shredded for sandwiches.

By buying either the point or flat of the brisket, you will not only save money but will also be able to prepare the meat faster and easier.

The flat half of the brisket is often referred to as the first cut. It is the larger part with a flat, long, rectangular-shaped, and lean muscle. It has a “cap,” which is a thick layer of fat on top, which provides flavor and juiciness to the meat once the fat renders during the cooking.

Cooks and pitmasters usually trim down the flat prior to smoking or cooking it. In some cases, you may find it trimmed and ready for cooking at your store or butcher shop.

The flat half of the brisket is the part that is more commonly available in stores.

It is suitable for slicing and is perfect for preparing corned beef sandwiches.

Brisket Point vs. Flat When it Comes to Smoking

When prepped and cooked properly, both the point and the flat of the brisket are absolutely delicious.

The problem is – how to decide which one to choose?

The flat has a shape and texture, which is perfect if you want to serve uniform pieces of sliced beef to your family and friends.

The point is the better choice if you are looking for ground meat for making juicy burgers or shredded meat for sandwiches. Keep in mind that the point is smaller, and after the fat has rendered down, you will end with much less meat.

Separating the Flat and the Point Step by Step

If you have a whole packer beef brisket and want to cut it down to two separate pieces, namely the point and flat, you should follow these steps:

By buying a brisket point or flat, you will save time, effort and money, and can still end up with a delicious smoked meat dish. Each of these pieces of the brisket cut has its pros and cons, and both can be delicious when they are prepared properly.

The essential distinctions between the flat and the point are that the flat is leaner, has more meat, and is easier to slice, and the point is juicier with a more intense beefy flavor but yields much less meat.

Whichever part you choose, we wish you good luck with the smoking, and we hope that you enjoy the results!